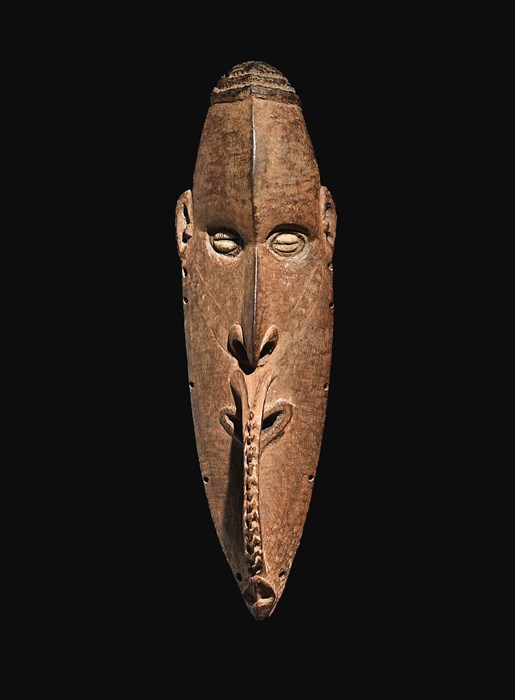 An extremely fine and elegant mask representing the male element of the Mei couple. The hieratic, yet peaceful, elongated face is carved in a semi-realistic fashion with large oval eyes sunken under an arching brow. The nose is long, aquiline, and superably rendered with finely carved nostrils and a pierced septum. The ears are carved in a naturalistic manner and pierced twice. The up-turned, open mouth sports a gentle smile with ridged lips. Rising from either side of the nose are the remains of a keloid, feather-like scarification (now worn/cut away). From the philtrum on the upper lip a long, curved element (molot) projects down and arches to the rejoin the face at the chin where it terminates with a small, inverted ancestor mask. The bridge of this arch is beautifully carved with a linked series of stylized ancestor faces. The top of the head is decorated with three raised ridges. The rear of the mask is hollowed out and the summit is pierced vertically for attachment. The outer edges of the mask are pierced from the ears to the chin for the attachment of a cane and human hair beard and various other ornamentations.

The Mei (Mai, Mwei or Mvai) masks represent the ancestral sisters and brothers of a village clan. Each clan owns a pair, and when not in use, they are kept hanging in the clan elder's house. The masks are related to head- hunting and to warfare. Masks appear and are danced in pairs with, in some cases the longer thinner example representing the male and the shorter larger one the female or in other cases the first represents the elder brother and the second the younger one. The Mei couple, or should I say duo, symbolizes duality, a principle that organizes many Sepik River societies among the Iatmul and the neighboring Sawos language groups. Attached to rattan and coconut fiber conical supports which covers the head and shoulders of a dancer, they are completely painted in black, white, and red ochre and sometimes richly decorated with cowries inlayed into a clay and resin base.

Mei mask performances begin with the construction of a fenced compound. Within it, the men build a raised platform, with a backdrop depicting the mountains where, according to oral tradition, the masks originated, and a ramp that extends over the wall to the ground outside. As the performance begins, the Mei masked dancers burst from behind the backdrop and stride down the ramp. Reaching the ground outside, they are joined by the women, who accompany them to the dancing ground, where a lengthy performance ensues before the dancers finally retire into the men’s ceremonial house. While similar in shape, the style and decoration of the masks vary from village to village throughout the Sepik River region.

A similar example of the same typology but of lesser esthetic quality was part of the André Breton collection (https://www.andrebreton.fr/fr/work/56600100686960)