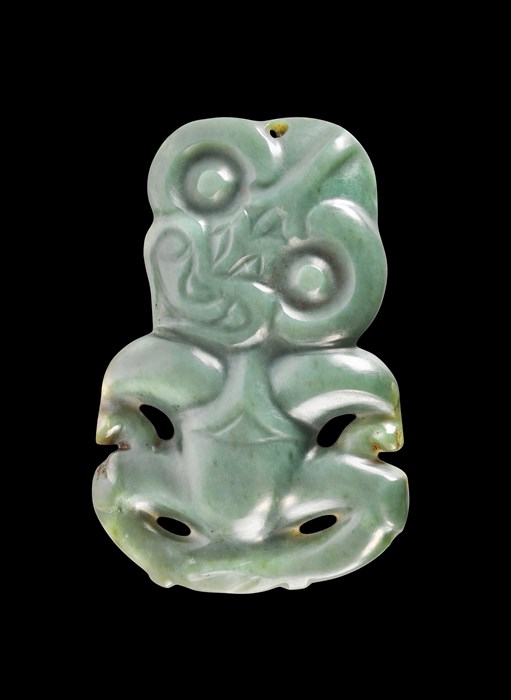 A large and powerfully carved Hei Tiki in the form of a stylized human figure with head turned to the right and bi-conical drilled suspension hole. These nephrite pendants, hei (pendant) tiki (man image), were worn by men and women of high rank, and served both as ornaments and symbols of authority. They were imbued with sacred power and the material itself was reserved exclusively for owner ship by noble bloodlines. Hei tiki of this superb sculptural quality are rare, and this example is to be considered one of the very finest.

The exceptional proportions, as well as the quality of the carving and the beauty of the stone, place the present hei tiki amongst the most remarkable treasures (taonga) of Maori art, an object, which superbly combines the principles of power and ornament and beauty.

The Hei Tiki – a cultural object worn around the neck - is considered a taonga tuku iho (treasured heirloom) because each hei tiki is handed down from one generation to the next and emotionally connect to the memory of tupuna (revered ancestors). No two hei tiki are alike and each one has its own personality imbued with wairua (spirit).

Most hei tiki, including many of the very large examples, are relatively narrow, having been carved from chiefly nephrite adze blades. Thus, the outer sides of the arms are flat edged and the general relation of width to length of the large tiki is quite low. Here we have a high ratio with a wide body relative to the length of the figure, which indicates that this Hei Tiki was carved most probably from a large pebble. It corresponds to the Type B of the Hei Tiki Shape Chart by D. Austin 2015. The body projects forcefully outwards. The tension of curve and counter-curves is accented by inclined planes drawing the eye inwards. The fine balance of the openwork areas of the arms and legs creates a perfect symmetry accentuated by the placing of both hands on the powerful thighs. The ribcage is well defined adding power to the large shoulders. The powerful face is symmetrically carved with strong brows framing wide set round eyes. The nose is flattened with large aggressive nostrils and the peaked bridge representing Mount Taranaki. The open, grimacing mouth offers a pointed lower lip, and two upper fangs protrude to either side of the extended, forked tongue.

Major General Horatio Gordon Robley, the great colonial period collector of Maori culture, noted in 1915, that there were two types of hei tiki. The first type is known as Robley Type A with the tiki head, turned left or right, resting on the shoulder, and with both hands positioned on the thighs. Type B is rarer with the tiki head raised, showing a defined neck cut free of the shoulders, and with one hand raised to the chest or mouth and the other remaining on the thigh. Type B hei tiki also lack ribs, and one shoulder is hunched.
Most hei tiki are carved with the head inclining to the right and some to the left. There does not appear to be any particular significance to this, but those with the head to the left seem slightly more common. There is a small quantity of hei tiki carved with the head presented straight up in a natural position, this appears to be a more archaic format.
The material used for hei tiki is predominantly nephrite (commonly called jade). Other materials are Bowenite a softer serpentine stone, and possibly human bone – notable the skull – but this is not yet fully confirmed by research. The Maori recognize a wide range of colors in nephrite, each prized for a particular representation. The most coveted being the light « sea-green » or « milky green » nephrite (known as greenstone in New Zealand) which they call inanga or « whitebait » greenstone, because of its similarity to the colour of the whitebait fish (Galaxias maculatus).

Hei tiki were recorded by early European explorers such as Jean François Marie de Surville in 1769, and subsequently Captain James Cook and their followers. These famous ornaments, coveted by European visitors and collectors back home were a major source of income for Maori. Large numbers of Hei Tiki were produced in the European contact era. Most were manufactured in the late 19th century when the arrival of steel tools and industrial stone cutting equipment became commonplace.