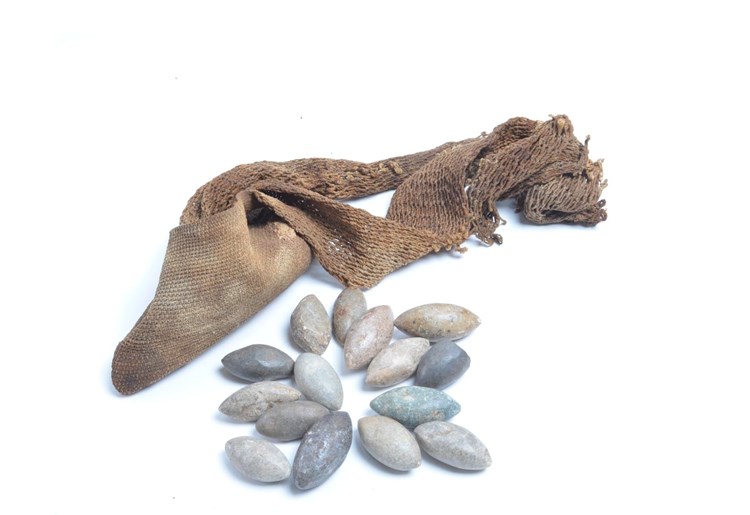 A belt-pouch for sling-stones with a set of 15 stones. Slings were an ubiquious weapon in the pacific and were used for hunting both fowl and larger game as well as for war-fare. Very few of the island cultures perfected the sling to such a point as to use only specifically fashioned stones as amunition. The Kanak culture went so far as to create stones that were not only useful in stunning the opponent but could actuely do pentrating harm as the were sharply pointed at the distel extremities. The stones were kept ready in a knoted fiber pouch/belt that was either straped around the warriors waist or over his chest in bandonlier fashion. Kanak, New Caledonia, Melanesia. Bush fiber and steatite. 19th century.

Literature:
"Most of the native warriors were good with the slingshot, and they were able to throw the stone with terrifying force. I once saw a man throw one of these stones with such power that it smashed the ground, even at a distance of almost a hundred yards. It is easy to imagine how easily they can pierce the enemy's skull.
Excerpt from Emma Hadfield's book (chap 10) : Among the Natives of the Loyalty Group, London, Macmillan, 1920: Fadhila Le Meur