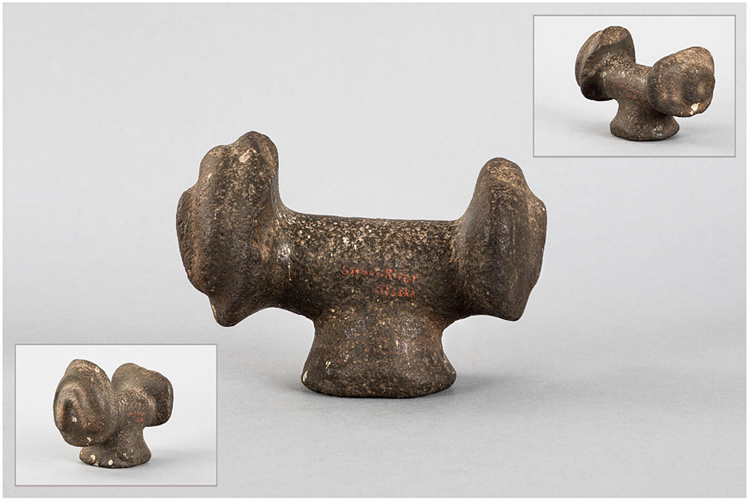 Hammer or pestle in the shape of a "T" or also said to be of "stirrup" form. Being of infinite rarity, the British Columbia T-mauls were certainly functional objects, but above all they were endowed with great prestige and power because of the difficulty in producing them. Cut from the hardest basalt, the lateral wings or flukes protruding upwards are adorned here with deeply carved sexual motifs – vulva and anus to either side. These hammers were probably used by the artists of the Native American tribes of The Northwest Coast of Canada for the manufacture and ornamentation of great carved and ornamented works such as houses, totem-poles and large ocean-going canoes for hunting and war. While some of the examples that have been found show that the T-maul form is produced from broken stirrup mauls where the curved bridge has broken away from the « stirrup » shaped handle there are a number of T-mauls that were obviously made with the specific format in mind. British Columbia, Canada. Basalt. Dimensions : 17,5 x 8,2 x 12 cm. Late Period (1500 BC until the middle of the 18th century).