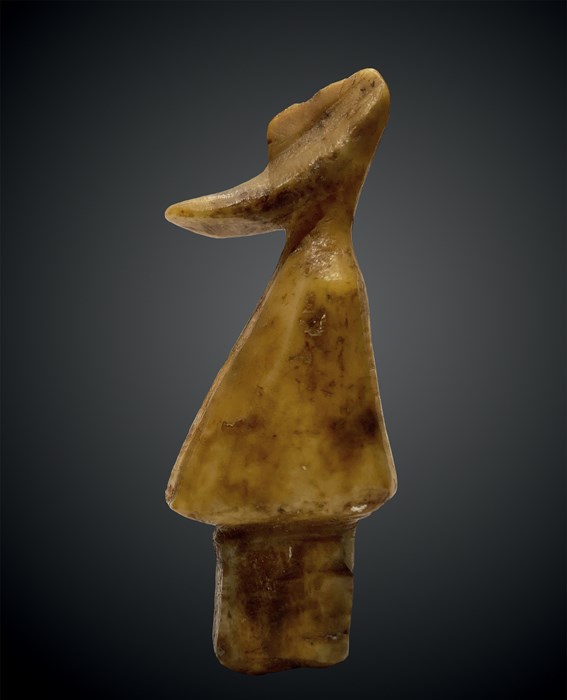 A minute effigy of an Aleutian hunter wearing his bent-wood hunting visor.

Literature: These hunter-effigy sculptures are of extreme rarity. The most renowned example is the one in the Menil collection published as N° 286 in the catalogue of the superb exhibition La Rime et la Raison - Les Collections Menil Houston - New-York at the Galeries nationales du Grand Palais in Paris in 1984.

Objects of this type are thought to be finger-rests which project laterally from the shaft of the harpoon helping to ensure the grip in the cold and wet conditions of hunting in a seated position and forcefully throwing a harpoon with an atlatl from a Baidarka type kayak. The thick, squared section under the figure would have been inserted into a lodging in the wood shaft of the harpoon. The figure is shown wearing the large waterproof parka made from seal or walrus intestines and his prominent visor or hat. The long-billed visor is essential to the hunter in his kayak, not only protecting his eyes from the glare of the sun but functioning as a tribal identifier and indicator of clan and social rank. As the hat is festooned with carved ivory hunting amulets the visor is primordial in inducing the prey to submit to the hunter. It is of interest to note that in the published photograph the Menil example is not shown with the insert section apparent. Aleutian Islands, Bering Sea. Late Punuk to mid-Thulé period (c. 800-1500 AD). Mineralized walrus tusk with a fine patina of age and usage. 5,3 cm.