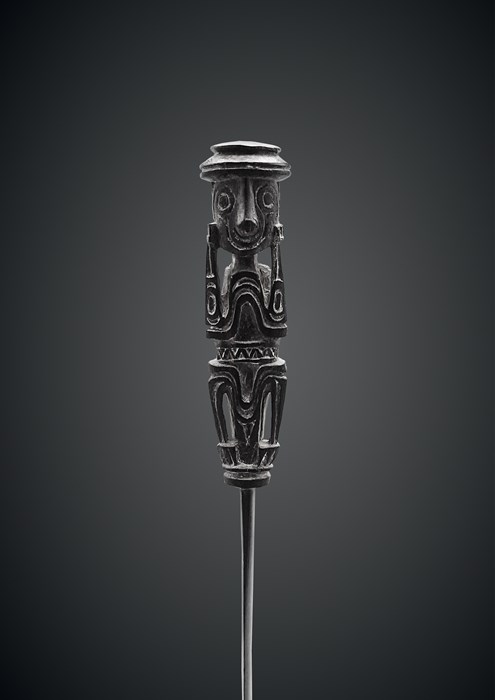 A superb lime-spatula with a figure showing splayed limbs carved in a highly idiosyncratic style. The limbs are triangular in cross-section, the hands are on the cheeks, the toes on the front and sides of the platform. The zigzag around the figure's waist may represent a belt. Massim Region, South East New Guinea, PNG, Melanesia. Ebony wood with a fine patina of age and use. 27.6 cm. Late XIX or early XXth century. The splayed figures of lime spatulas are reminiscent of the splayed figures at top center of canoe splashboards from Dobu Island. These figures, supplied with the right magic, protect canoes on their voyages.

…Peoples throughout the Sepik region use betel nut, the fruit of the areca palm, which is chewed with lime made from burnt shells or coral and other substances to produce a mild stimulant effect. Sepik peoples create a variety of betel nut chewing accessories. Individuals who have lost their teeth often use a betel nut mortar, to aid in chewing betel nut. When chewing, the individual periodically places the nut and a small quantity of lime in the mortar and crushes it with a pestle to release the active ingredients before placing it back in the mouth. Some betel nut mortars, carried by male elders, served as marks of secular and religious authority. Often adorned with images of spirits, ancestors, or other supernatural beings, some also had magical properties.