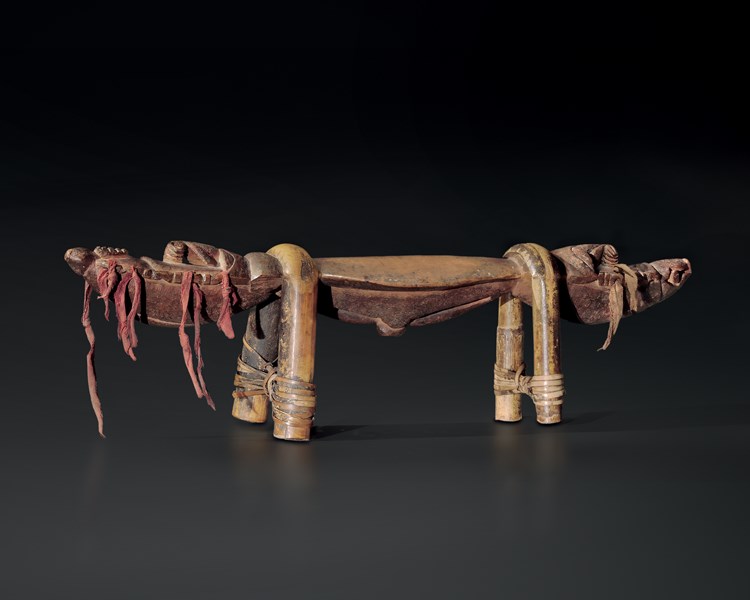 A very rare headrest decorated with large ancestor masks at the extremities. The underside of the bar is deeply carved with a complex open-work design. The two powerfully carved heads at the extremities of the neck bar are carved in an expressive almost cubistic manner. The small head terminates at the chin with a stylized zoomorphic head. The ancestors both wear complex nose ornaments typical of the outlying islands off the North Coast. Their faces have open-work decorative elements around their outer edge as if portraying their beards. Bits of trade cloth are threaded through these lodgings. The legs of bent ratan are strapped together with thin bands of ratan.

After studying law and economics, Albert Hahl (1868-1945) worked for a time in the Bavarian Ministry of the Interior before entering the imperial colonial service in 1895. He began his career as a judge in Herbertshöhe (now Kokopo) in New Britain (Bismarck Archipelago, German New Guinea). He subsequently occupied several posts in German colonial Oceania (Melanesia and Micronesia) before being appointed governor of German New Guinea in 1902. In this position, he administered all German colonial properties in the South Pacific with the exception of Samoa. Hahl actively participated in the exploration of the territory and he was the first to visit the island of Bougainville (Northern Solomon Islands).

Hahl was also very interested in ethnology as a discipline and interested in current research and methodological developments. All while contributing to the installation of colonial power, he worked to learn myths, languages, and the arts so as to preserve a trace of a way of life that he knew was doomed to disappear. But beyond his personal interest, he used the discipline of anthropology to carry out his colonial policy, having knowledge and information on the ways and customs of the populations enabled him to better administer them.

Hahl is also in contact with several German museum officials to whom he sent a number of objects collected in the field by himself and his colonial administrators. Many of these objects collected, mainly from German New Guinea, the Bismarck Archipelago and the Solomon Islands, are now in private and public collections.

Moreover, it is under his mandate that the use of traditional currencies was forbidden in favor of the German mark and that new taxes ("head-tax") were put in place. These measures contributed to the offering of many objects by the Papuans for sale so that the local people could pay taxes and access consumer goods imported from Europe.

Hahl served as governor of German New Guinea until 1914. When the First World War broke out, he was in Germany for official business. From 1914 to 1918 he held an officer's post in the Bavarian army and in 1918 he was finally appointed director of the Neu Guinea Compagnie, a purely formal position however, as the German Empire had fallen at the end of the First World War.