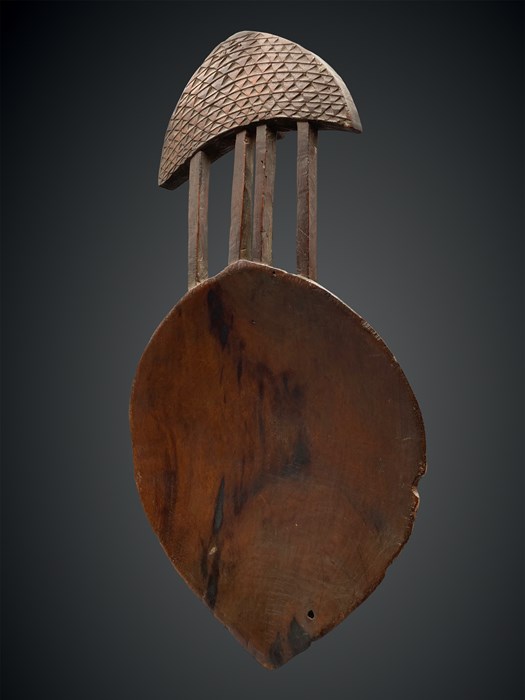 A tripod, lenticular, flat, priestly oil-dish sedre ni waiwai which contained sanctified coconut oil taken and rubbed on the priest’s body prior to the ceremony of communing with the ancestors and performing rituals. The large crescent-form handle is carved with a rare form of repetitive triangular motifs reminiscent of shark teeth. The four, square sectioned struts which attaches the handle to the bowl were originally six, however two were obviously cut away in olden times for unknown reasons. Fiji Islands, Polynesia. Vesi wood (Intsia bijuga) with a fine oily patina of age and use. 56.9 x 30 x 8.6 cm. 19th century.

Carlo Monzino (1931-1996)
His collecting passion began with a fascination for Japanese and Indian art when he was in his thirties. He then evolved towards the art of Africa and the Pacific all the while collecting important modern art. He is credited with being one of the first to recognize the importance of Jean Fautrier and was as well a close friend and patron of Andy Warhol. In 1964 with the help of Charles Ratton he was able to acquire most of the outstanding collection of the sculptor and collector Sir Jacob Epstein – in all some 900 pieces ! Carlo Monzino devoted a lot of time and expense towards developing the understanding of primitive cultures, inviting well known academics to give interviews and conferences as well as publishing a scholarly revue "Quaderni Poro".

See the very similar example MAA:Z 3718 in the Museum of Anthropology, Cambridge which has a crescent handle with two panels of carved triangles collected by Sir Arthur Gordon between 1875 and 1880.

BM registration N° Oc2006,Drg.421. NB : the British Museum describes this drawing as : « … tracings of drawings made by Constance Gordon-Cumming, of objects collected in Fiji by Baron Von Hugel and Sir Arthur Gordon. These objects are now in the Cambridge Museum of Archaeology and Anthropology. Whether or not the tracings were made by Constance Gordon-Cumming is unclear. »