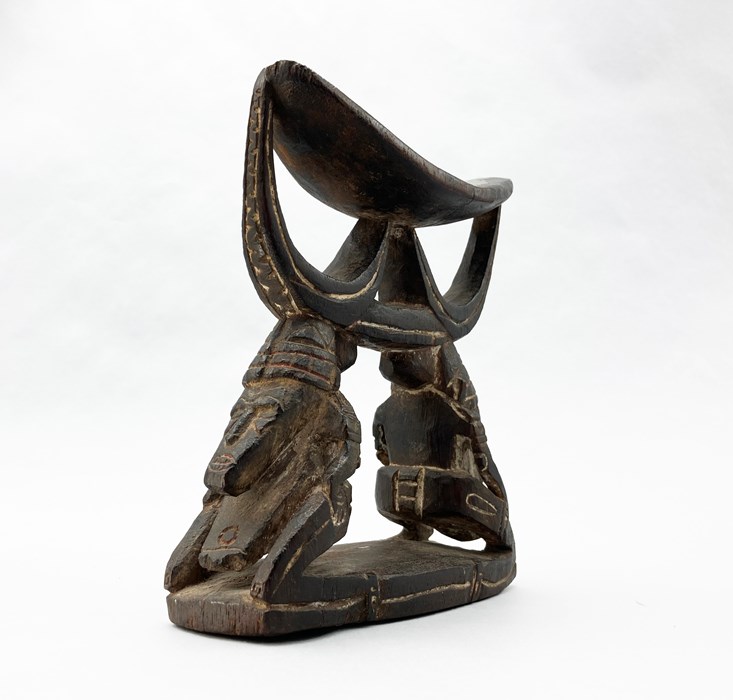 A headrest supported by two kneeling ancestor, or kami figures. This example was definitely collected at a time when European influence was still limited. The hard, aggressive and angular features of the two figures are unusual when compared to classical Tami examples. Whether this is due to it being from a remote area or possibly carved by a provincial master is undecided. The overall workmanship is refined and the composition well balanced with the two figures supporting the large U shaped struts as if they were some form of ceremonial headdress.

William Campbell Thomson, born in 1855 in Glasgow, Scotland, sailed from his earliest age and later served for five years on the John Wesley, a missionary ship plying the South Pacific. He was also part of the voyages undertaken by Alexander Agassiz to Fiji in 1884 and in the 1890’s. Well known as captain of A.U.S.N steamers, especially the Wyandra, he joined the service of  the old Australasian Steam Navigation Co. in 1875, and rose to the command of the Arawatta, the Aramac, the Levuka, the Wyreema, the Wyandra, and the Wodonga. Most of the items in his collection were collected in the field and were often gifts received from tribal chieftains, notably Thacombau of Fiji reportedly a great friend of the captain. He later settled in Queensland and is considered to be one of Australia’s greatest seamen. He authored notable publications including “Gulf of Carpentaria”, “History of the N.E. Coast of Australia” and “The Early History of Australia”. Part of his collection, left to one of his daughters, Eulie Round (born Esther Eulalie Thomson), rested in a house in Caloundra, Queensland, from 1935 until it was moved to Brisbane many decades later. The rest of his collection was sold at Pickles Auctions in Sydney Australia on September 5th & 6th in 1986.