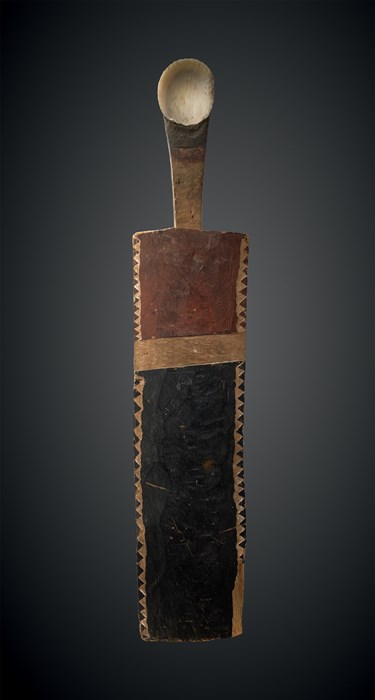 A decorated coconut grater. The coconut, which flourishes in brackish or salty coastal environments, forms a vital part of the diet of a large number of Pacific Islands inhabitants. The coconut grater is used to shred coconut meat from which the milk is expressed to mix with other staples such as yams, taro, banana, breadfruit, or fish. The coconut grater varies in form; the principle components, however, are a blade, traditionally of shell and a stick. The blade is cemented or lashed to the stick upon which the user sits to stabilize the implement while it is being used. When available, metal blades replaced shell ones. The present example has a certain spare elegance with its black, white and red pigmented dentate border. The original shell grater blade is secured to the one-piece seat with paranarium nut paste. The indented band across the bench is unprecedented in the few examples which have been located. This feature may have been the owner's modification to accommodate a binding that secured the grater to a solid base, such as a log or projecting beam. This coconut grater is quite old and is a rare decorated example of the basic implement. Bougainville or Buka Islands, Shortland Islands, Northern Solomon Islands, Melanesia. Wood, clam shell, red and black pigment, paranarium nut paste. 67.3 x 13.9 cm. 19th-20th century.

Literature: See two similar undecorated graters, from Shortland or Treasury Islands, in the collection of the Museum of Mankind, London.