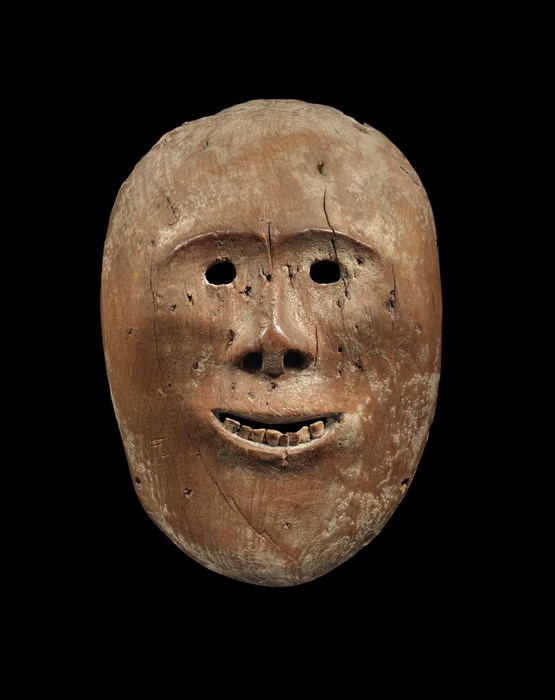 An early, very fine, and expressive mask representing an ancestral spirit, or a shaman. The realistic features are relatively unusual in the corpus of Northern Eskimo masks as most of the later types are quite highly stylized. The sensitive face offers an open and smiling expression with a subtle shaping of the cheeks, chin and forehead. The inside of the mask shows adzing and carving marks made with non-metal tools. The inside of the face is actually reminiscent of a human skull perhaps in an effort to display the duality of life and death. The outer edge is pierced in a regular manner either for the insertion of feathers or the stick-supports for a mobile structure forming a framework around the mask. The lateral edges are shaved off, possibly due the direction of the grain of the wood causing structural fraility. The teeth are carved from marine ivory in the realistic shape of human incisors and carefully implanted into the lower lip. The mask has a scattering of thick, salt-like deposits on both the inside and the outside. The front of the mask has several pockmarks as if large birds pecked it, which may have happened during the lengthy exposure of the mask perhaps displayed on a shaman's grave as is the norm.

Fitzhugh, W.W. & Crowell, A. : CROSSROADS OF CONTINENTS – Cultures of Siberia and Alaska. The Smithsonian Institution, Washington DC, 1988.
Fienup-Riordan, A. : THE LIVING TRADITION OF YUP'IK MASKS. University of Washington Press, 1996.
Private communications with the Sheldon Jackson Museum, 2015