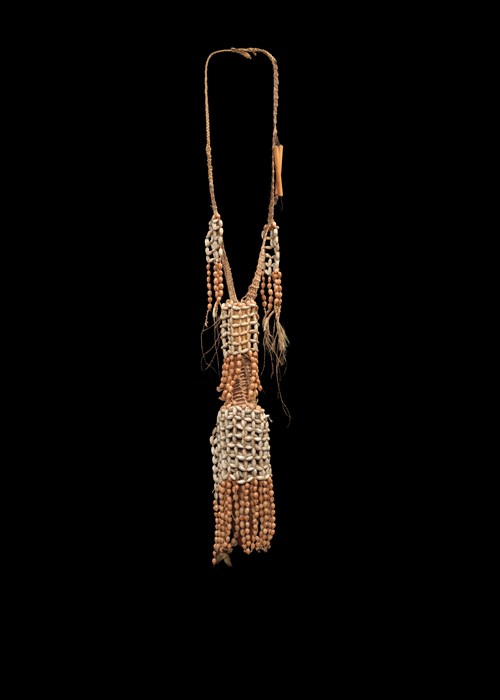 A very important Headhunter's decoration called ramog in the language of the Yahray Tribe of Southern Irian Jaya. It possibly represents a phallus, partly covered with a fringed skirt made of Jobs Tears seeds and is worn hanging on the back of the distinguished warrior. The neck-strap is decorated with several pieces of bamboo. This type of decoration was made by the old men of the tribe and was officially awarded during the batik-jamé, a pig feast that followed some successful headhunting raids.

There are four levels of distinction amongst the Yahray headhunters and the ramog is the first – awarded to a warrior who had succeeded in killing eight opponents during headhunting raids. The others are the tok for at least 12 kills; the oana for at least 15 kills; and finally, the ultimate distinction is the gouwa awarded to those who possessed the ramog, tok and oana.

Provenance Collected in the field by a Dutch colonial circa 1940/1950 and since then forgotten amongst his belongings. Ex coll. : Maurice Stevens, Holland.

I wish to thank Niels Beckers for not only bringing this important information to my attention but for also publishing an in-depth study of these ornaments and the Yahray tribe as well as bring into the limelight the published works of rev. father Jan Boelaars (1915 - 2004) a Dutch missionary.

Ref. :  click here for the PDF of the Niels Beckers article on Jan Boelaars and the Yahray :
Niels Beckers PDF