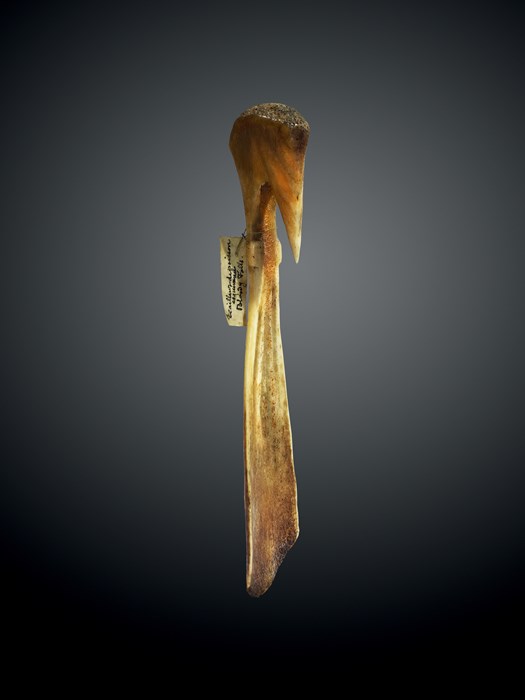 A food scraper in the form of a beaked avian being with stylized, stumpy wings. The overall form and type of bone used would logically place this object in the Adzera Language group of the Markham Valley in Papua New-Guinea. However, a label added in the early 20th century by the previous owner places it very specifically, yet controversially in the area of Bloody Falls, located in Nunavut in British Colombia, Western Canada and describes it as a fish scaler. If taken to be, as it seems from a superficial observation, from New Guinea then one must take into account the unusual treatment of the beaked head, the presence of the arms and the superbly carved fluting on both the beak and the blade. In the case of the beak this fluting offers a remarkable similarity to the usual notched or fluted representations of the beak of the great hornbill (Rhyticeros plicatus). This type of work and representation is atypical amongst the Adzera – but not completely discountable. If the information on the label is correct, then this is in principal a first-time identification of an object of this type from British Colombia. There appear to be no recorded examples of an object of this physical description with this type of function. The material, which is the foot bone (metatarsal) of the common pig (or feral pig or wild boar) is the common one for the Adzera scraper from New Guinea. In North America the pig was only introduced by Spanish immigrants as of the 16th century and while the time frame permits the expansion into British Colombia it appears doubtful that the native people of Canada would have created the exact same type of object as in New Guinea. Further visual analysis does not provide a more precise location; thus, DNA testing would be the obvious solution to define the origin of the source animal.

With regard to the probable miss-identification of the object on the label I would presume that this piece was one of the many items acquired on the French antique market, probably at Clignancourt, and that Merite wrote down what was told to him by the seller.

Édouard Paul Merite
French painter and sculptor born in the Eure, France (1867 – 1941).
He was a pupil of the sculptors Louis-Ernest Barrias (1841-1905) and Emmanuel Frémiet (1824-1910), whom he succeeded as a drawing teacher in the National Museum of Natural History (Paris) between 1923 and 1937. He painted in particular the fauna of Europe and maintained in his studio in Rueil a quantity of small live animals. He participated in two expeditions to Africa in 1898 and 1899 and accompanied the Duke of Orleans on two exploratory missions to the Arctic Circle in 1905 and 1909. A Cape in North Greenland bears his name. Invited by the Emperor of Austria on the occasion of the imperial hunts, he was knighted by the order of Francis Joseph. As an enthusiastic hunter he authored a book entitled "The Traps. History and trapping techniques around the world" in 1939. His ethnographic collection of decoys, cages, lures and traps from around the world was well known in his lifetime by specialists. The collection was particularly rich because Edouard Paul Mérite completed his field collecting with objects which he acquired during his visits to the Paris Flea-Market in Clignancourt. In 1953, the MNATP (Musée national des Arts et Traditions Populaires) bought 286 pieces from the Merite collection, including 8 terracotta whistles. The rest of the collection was sold at auction by Maitre Vincent at Hotel Drouot in Paris in 1954. Merite usually labeled his objects with a small piece of parchment inscribed with the relevant information written in a tight script with back ink.