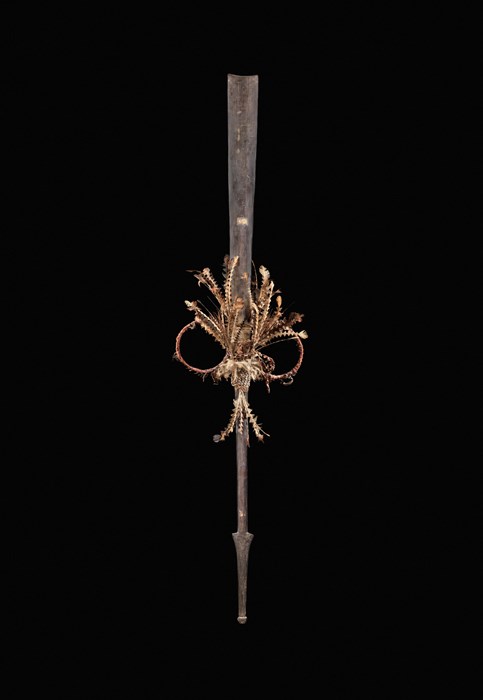 A very finely decorated palau bubu type war club with flat bevelved tip. Shell money (diwarra) bound around the shaft with the cut and ornamented feather-bunchs as well as the twin cane loops covered in red cloth and ferns, shows that this weapon has been transformed into an important ceremonial staff which was used during war related ceremonies and bridal rituals. These staffs also called ram were notably used in the kulau dance and for dukduk ceremonies.

Provenance Provenance : Field collected by either Father Mathäus Rasher (murdered together with a number of missionaries and MSC sisters by the Baining People in Toma Village on August 13, 1904), or by Richard Parkinson (1844/1909). Father Rasher and Parkinson traveled often together with Parkinson collecting art-works and Rasher making converts. A large group of artifacts were shipped back to the main Mission in Hiltrup-Munster (Germany). Many of these items were later sold to Loed van Bussel in the 1960’s. Four of these staffs were in the Hiltrup collection purchased by Van Bussel - two of which are in private collections (one ill. in OCEANIA at ING cultural Center, 2008/09) and two (including the present example) were in the collection of Galerie Meyer (2008/2009).