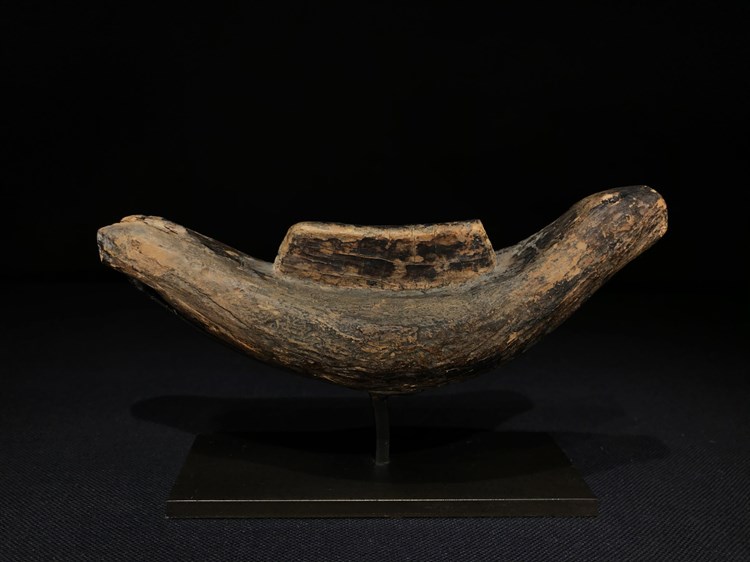 E 302) A very rare mouthpiece for pump or bow-drill carved in the shape of a seal. The eyes were inlayed with quartz or glass (one missing). The drill-shaft lodging is a hard stone circular inlay with a conical well for the insertion and rotation of the drill-shaft. The grip shows usage with teeth markings and pressure points evident. Bristol Bay Area, Alaska. Soft wood (pine) with one small quartz inlay and a mottled green and black stone inset, the whole with a worn, oxidized and used patina. 14,3 x 4 x 4,3 cm. 19th century or earlier.

The mouthpiece carved in the representative format of single or double headed seals is extremely rare. Less than 10 appear to be recorded and illustrated. An identical one but of lesser quality was sold at Heritage Auctions Nov. 6, 2015. Another by Skinner and another by Walkers in Canada, yet another was in the collection of John Hewitt in London. Another is illustrated on the internet but not localized. There is an example (drawing here) in the collection of the Smithsonian Institution in the form of a stylized seal (Cat. No. 127819a, U. S. N. M. Koggiung, Bristol Bay, Alaska. Collected by W. J. Fisher)

The drill is the most important implement for working in ivory and bone. It consists of three parts: the bow with its string (niuqtung), the drill (qaivun), and the mouthpiece (qingmiaq or kĭ´ñmia). The string of the bow is twisted around the shaft of the drill, the mouthpiece, which is made of wood or of bone and has a concave stone inset for the drill shaft is taken into the mouth, and the rounded end of the drill is placed in it the stone hole. Then the whole implement is put firmly against the place to be perforated and is set in motion by moving the bow. Instead of the latter, a string is sometimes used with a handle at each end. For one man, however, the first device is handier. The string of the second form is usually pulled by one man while the other holds the mouthpiece.