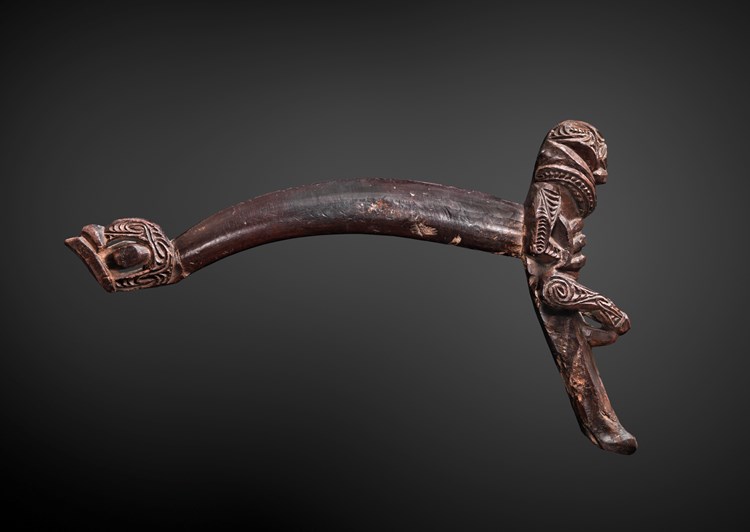 A very fine and rare snare, or mutu kaka, used for catching wild kaka, or parrots. The vertical attachment bar is beautifully carved with a large and strongly expressive ancestral figure. The large tiki is shown in a seated position with the head bent forward, the hands clasped on the belly and the legs slightly bent with feet joined. The horizontal perch is decorated with minute notches along the upper ridge and has a very graceful curvature terminating with a highly stylized humanoid head or manaia. The main figure is pierced through on both sides for the passage of the snares cord. Maori, North Island, New Zealand, Polynesia. Kauri pine wood. Old break and repair to the head of the tiki. A fine patina of age and use. 34 cm. 19th century.


Doctor, Polynesian art lover, specialist in painters inspired by Tahiti, Norbert Murie, born in Rennes in 1937, studied medicine in Paris,specializing in endocrinology-diabetology and nutrition. In 1972, during a one-year internship in Marseille he discovered "the South". He finally settled in 1976 Rennes. From there he took advantage of international medical meetings to travel and becoming interested in ethnology. In Japan, he met a colleague who wanted to be replaced in Tahiti. Eight stays in Polynesia will allow him to discover this admirable archipelago and to deepen his knowledge of the Maori culture. Gradually becoming a lover of Oceanic art, a collector of books on travel, especially on the Polynesian Triangle, he broadened his quest to exotic painting, and more precisely to “painters inspired by Tahiti”. In 2000, he published a collection of literary short stories grouped under the title "De plus loin que Tahiti," in which he quotes Raiatea and Tahaa, “the island of images” by the painter Octave Morillot.

The Maori are the only people in the South Pacific to make use of such a specialized and highly decorated snare. The trap was attached to a pole placed amongst the branches of selected trees with the hunter often hidden under a covering of leaves. When a kaka or parrot landed on the perch to eat the fruit set out as bait the hunter pulled hard and sharply on the snares string trapping the parrot’s legs. Tame kaka, were sometimes set about in the tree as decoys calling out to their wild brethren. Fowling or the art of bird hunting was of great importance and special houses, whare mata, or whare takaha, were set aside for the storage and making of snares and hunting equipment. The whare mata was taboo (tapu) and women were not allowed to enter them. The kaka was abundant and during the short fowling season an expert bird-catcher could snare as many as 300 a day, and sometimes three or four birds in one pull of the cord. It is reported that in a good hunting season, which occurred every three years or so, some 10,000 to 12,000 kaka parrots were harvested.