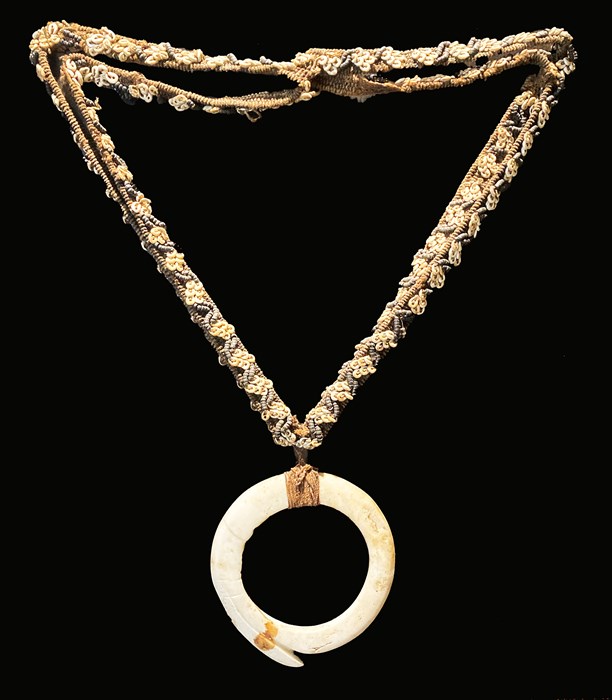 A carved shell money-ring, or yua, in the form of a highly stylized great horn-bill bird curled around on its self which is used in marital ceremonial exchanges. Amongst the Abelam and Boiken people of Papua New Guinea the money rings are exchanged by the boys familly to the girls familly in compensation for her leaving to live with the boys group. The value of both the young woman and the individual rings is the subject of intense discussion and debate by both parties.

This example is highly unusual as the Yua is mounted on a necklace made by the people of Easter Korwar fringe based along the mighty Mamerambo River. It is more than probable that the Yua was obtained in in some form of exchange système having been transacted over several hundred kilomters

To understand the exceptional value of the yua in the local monetary systeme one must take into account that the only part of the shell of the giant tridacna clam that is thick enough to provide the raw material for this type of ring is the "heel" or hing where the two halves of the molluscs shell are joined. Freshly collected shells were never used, only those unearthed on the shore and therefore of great age, were considered fit for the making of valuables. In the case of the largest yua, the overall size of the original clam shell would have to be gigantic, over a meter in length, and the animal itself had to have been of an extreme age for the shell to acquire the necessary thickness.