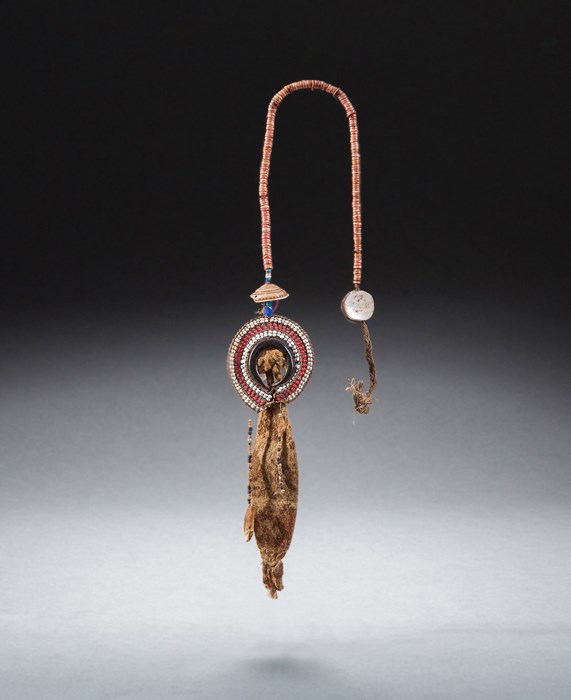 A rare currency strand, or “mis”, with a high-status finial (possibly called “manum”) attached to one extremity. Mis are a currency composed of hundreds to thousands of thin cut shell discs strung on a fiber strand. Mis is used not only in financial transactions such as the purchase of food or a goods such as a canoe but more importantly it has a powerful ceremonial and symbolic status as well. It serves during bridal and funerary exchanges and compensation payments related to deaths. Mis terminating with an ornamental tassel composed of either a seedpod (generally that of a Sapotaceae fruit tree), a shell, or a carved section of wood systematically surrounded with a flange of beadwork were owned exclusively by clan leaders. It is reported by Richard Aldridge who collected this example in the field « that only people who have 20 lengths of mis are allowed to have mis with the decorative end » so it is also a status piece.  Mike Gunn reports that on the Lelet plateau of New Ireland the currency is regarded as « the basis (or foundation) of the Men’s House ». Aldrige reports as well that the shells used to cut the discs originated from the Tigak Islands situated to the north west between New Hannover Island and New Ireland.