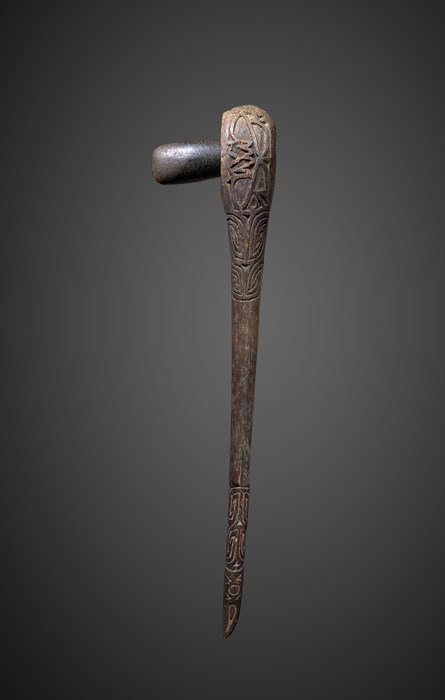 A fine stone wood-cutting axe composed of a long carved and decorated haft and a polished hard-stone blade. The haft is carved in champ-levé style with typical Asmat motifs which include what appears to be a butterfly or flying fox (fruit eating bat), floral representations that offer a stylized human face in repetition and the finial is carved as a long bird head (crand or horn-bill).

For the Asmat, stone axes were one of the most important objects in the trade networks because no stone was present in the natural habitat in low-lying river areas. The inhabitants of the low-lying areas obtained axes through the trade networks of those who lived in the high-lying areas. They made the axes by roughing out the blank by hammering and pecking followed by smoothing, polishing and finally sharpening. The stone blade was secured, hammered in place with wedges or wrapped with bark into the wooden or bamboo haft. The axes were made in many different sizes and were used for various tasks such as cutting down trees, horticulture, building canoes, carving and food preparation. In many cases they were used as weapons in headhunting raids as well. Because the axes were so precious, they were personified and given the name of an ancestor. The stone axes were the primary tool before Europeans introduced iron axes to the area.