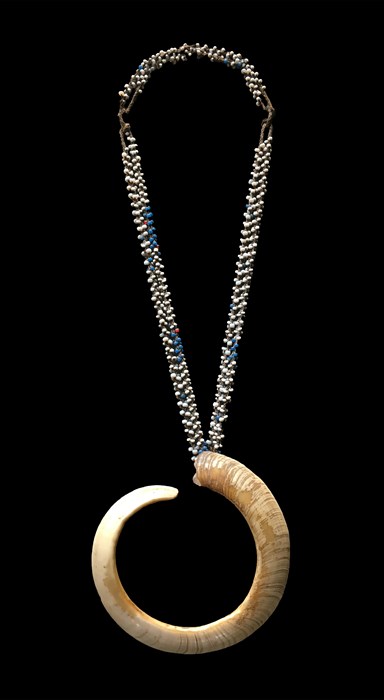 A very fine batinivuaka – a chiefly neck ornament worn at the base of the neck. Boar’s tusk pendants were an important part of ceremonial, dance and war attire. In the late 1700s and early 1800s with the introduction of glass beads attached to the fiber ties, they served as symbols of chiefly status and were worn only by those of recognized rank. Throughout the Pacific region pigs are high value items and currency, and a boar’s tusk – especially one that had grown to a full circle was indicative of one’s wealth, strength and influence. Fiji, Polynesia. Pigs tusk, vau, (Hibiscus tileaceus string), and glass trade-beads. Total : 37 cm; pendant : 11 cm. 19th century. Ex coll.: The artist John E. Grant, Victoria, Australia (1884-1957).

Provenance Grant was the art-master at the Technical School in Daylesford, Victoria (Australia). Following the destruction during WWI of the town of Villers-Bretonneux in France, he was commissioned to carve wooden panels consisting of Australian fauna and flora for the school, which was rebuilt with funds donated by the citizens of Daylesford. With his wife, they owned the “Hallow bank“ guesthouse at 6 Harts Lane in Daylesford from 1905 to 1955, and after his death Mrs. Grant kept it going until the early 1960’s. Around 1906/1908 Grant had  purchased a group of Fijian artifacts from a traveler in Kyneton and this group of pieces (including the present  plate)  was  on  display  in the Billiard Room of the guest house until  the death of Mrs. Grant and the closing of the hotel.

See the example in the collections of the Musée des Confluances, Lyon, ex Gal. Meyer and tose in the Fiji Museum, Suva.

See early photographes circa 1870/80 of Fijian warriors posing with batinivuaka around their necks and one instaled on a votive wood effigy in the Kerry photographe miss-identified as from New Guinea.