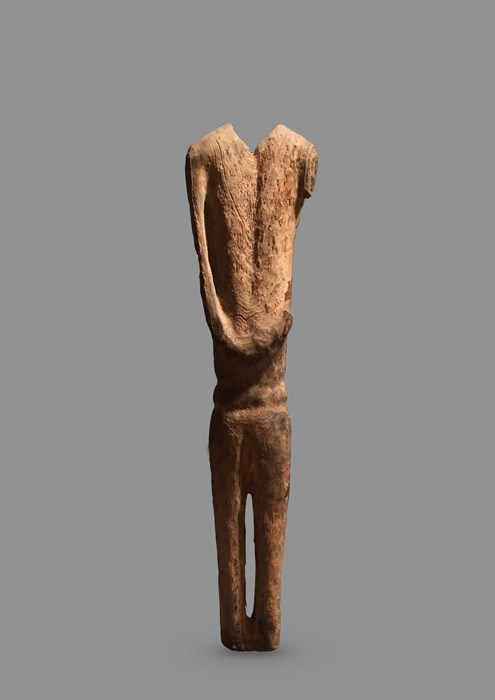 E 289) An archaic and extraordinary human headless figure. The arms (one missing partially) are cut away from the body with the hands joining together low on the abdomen. The waist appears to show a thick bulging belt or girdle. The torso is powerfully carved with extremely wide shoulders and shallow channel running from the V neck to the hands. The legs are cut through from thigh to ankle where the feet are adjoined. The body is curved slightly backwards showing a rare tension and alertness not often seen in Eskimo carving - as well, this offers a regal stature. The neck area is carved out to receive a separate, pegged head. There are very few of this type of assemblage recorded in the archaic Eskimo iconography. Unfortunately, due to the lack of defining identifiable features it is difficult/impossible to place this figure within a specific culture, era or geographical area. The patination shows it to be of great age and resembles the surface corrosions of both Okvik and Ipiutak ivories, but the presence of the belt and the lodging for the pegged head remain un-localized. There might be a possibility that the figure originates from an early Aleut culture (research is on-going)