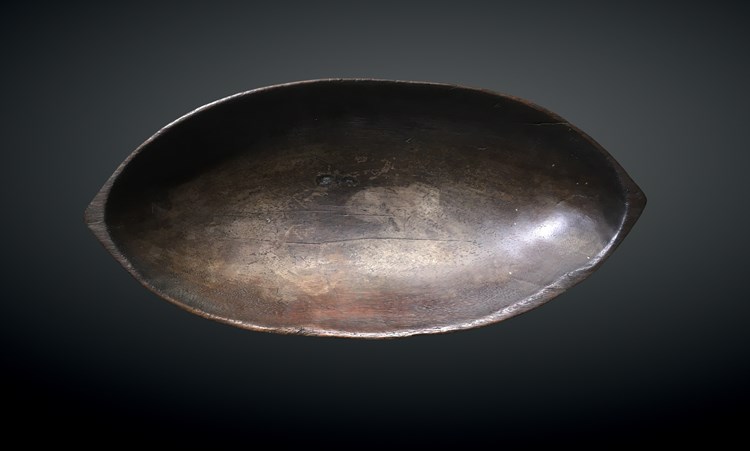 A fine, small oval priestly KAVA Bowl. The priest used this type of flat dish to drink kava from prior to going into trance and communicate with the ancestors. The underside is carved with a very fine double lug from which the bowl would have been suspended on the wall by a sennit loop when not in use. When seen from the underside with the lug at the top there is a remarckable resemblance to a stylized Flying Fox, the ubiquitous giant fruit bat found throughout the western Pacific. Fiji Islands, Polynesia. 40 x 19.2 x 6 cm. Wood. 18th/19th century.

Provenance Ex coll. : Pitt Rivers Museum, Farnham, acquired from the Wharton Collection in March 1899 as indicated by the painted lable. There are two early paper lables indicating for the first “N° 1773 Solomon Island Food Dish, 3.“ and for the second “223/8“. Ex. col. : Frits Schmidt (London) who acquired it from Lucien van de Velde who bought it from Loed van Bussel circa 1970.