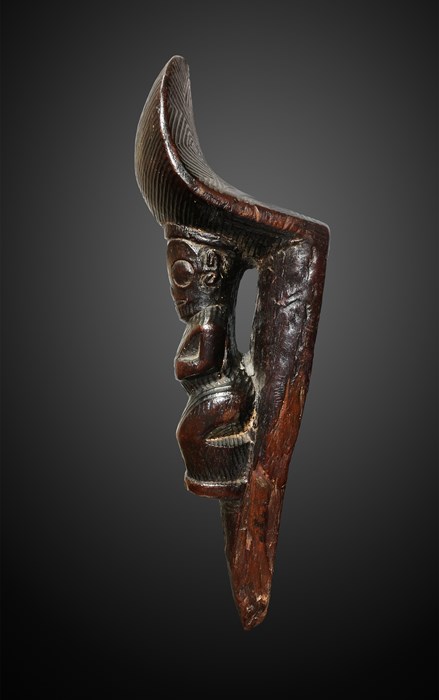 A fine and early stilt step, called toko in Marquesas language (or titoko on Uapou Island or vaeake), with a massive a-sexual tiki figure standing in the classical position known as the “Polynesian Stance“ – with hands to either side of the stomach, powerful legs slightly bent and the body in a slight forward position. The fully tattooed body is covered with incised lines and the inside of the step is fully carved with concentric diamond motifs and what is possibly a stylized, sweeping crown element. Stilt-stirrups or steps were used during stilt-jousts by young champions that seem to have been related to chiefly funerary ceremonies. Many of these stilt-steps were brought back to Europe as curios and were often attached to the wall as coat-hooks thus they are often pierced through the foot and have « eye -hooks » or the remains of screw-holes in top of the rear section. Marquesas Islands, Polynesia. Mi’o wood (Thespesia populnea) with a fine glossy patina of age and usage under an old coat of varnishand specks of white house paint. A small early plaster restoration to the top edge of the stilt and old loss to the lower left side. 33 cm. 18th/19th century.

Caroline van Santen, Curator at the Zeeuwse Museum in Middelburg, the Netherlands made a very interesting discovery when she found the previously unrecorded drawing of three men on stilts sketched in 1825 by J.C. Van Haersolte and she writes :

« …More interesting, however, are the drawing he made of a tattooed Marquesan man and his sketch of three Marquesan stilt walkers. The latter, although small in size, is proof of the fact that Marquesans still used stilts in 1825, whereas it was previously thought that they had already abandoned this practice at an earlier stage. Van Haersolte also made a detailed drawing of a stilt step. This drawing is linked to a pair of stilt steps in a Dutch museum collection. »