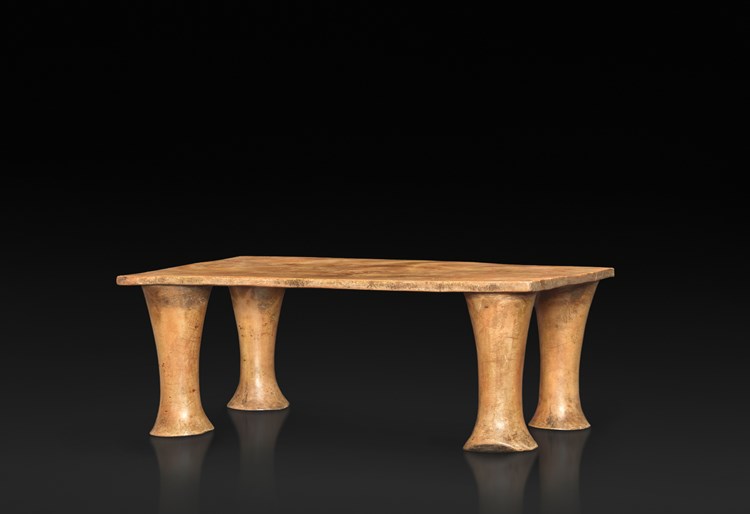 A Royal seat. Society Islands, Polynesia. Probably pua wood (Fagraea berteriana) with a coat of old, yellowed varnish. 62,2 x 23,5 x 37,1 cm. 18th/19th century. Pen & ink inscription “J.M. from (or Throne(Eng.) or Trone(Fr.)) OTahiti(e)” on underside. Ex private collection, UK. The marks on this seat show it to be made with non-metal tools.

Various types of monoxyle royal seats were used in the Society Islands and other Central Polynesian Islands such as the Austral, Cook and Tuamotu Archipelagos. The best known type, from Tahiti, with its curved seat on tall, straight, joint legs was first observed on the Cook voyages in the last quarter of the 18th century. A small number exist in public collections and even fewer are in private hands. The most notable example is the so-called “Omai seat” represented in the portrait of Omai painted by Nathaniel Dance in 1774 and now in the collections of the Musée de Tahiti et des Iles, Tahiti. The most common form of Polynesian royal seat is the superbly elegant model from the island of Atiu in the Cook Islands with its curved plateau set low on arched legs ending in drop-shaped pads. Other variations exist from the Australs and the Tuamotus. So far only a small number of seats with waisted, flared legs are known, notably the examples in the Otago Museum in New Zealand and in the Musée de la Castre in Cannes, France. These seats were used by Royals and Chiefs of supreme importance - the reason for the variation from curved to flat plateau remains to be determined; it is possibly a question of rank, local geographical origin, or simply part of an evolutionary process.

Literature: In the beautifully rendered painting by Pavel Nikolaevich Mikhailov, the artist on the First Russian Antarctic Exploration voyage of 1820/1821, we can see three Europeans seated on low seats. To the far left of the scene is a man preparing food on what appears to be the same type of platform and in the lower right hand corner is an upturned possibly larger oval table. Pomare II, the King of Tahiti, is receiving Captain Bellingshausen, Commander of the expedition, at breakfast. While the King and Queen remain seated on woven mats the three visitors of distinction are offered low, four-legged stools, identical to the one offered here.

In a recently rediscovered watercolor by Charles Giraud dated 1847 and representing the artist's concubine combing her hair, one can see in the far left hand corner of the dwelling a stool with waisted legs. It is standing a bit carelessly on its end against the inner wall of the hut hidden behind a glass water bottle. There is no information as yet as to where this stool went when Giraud left Tahiti to return to France – perhaps he took it with him – on the other hand it is possible that it stayed in Tahiti with the young noble woman.

The four early images show the same type of seat in various artistic renderings ranging from the naive through to the realistic. They date from 1802 up to 1847 and show that this type of royal seat was already in use in the Society Islands in the earliest years of the 19th century. Clockwise from top they are Bellingshausen & Pomare II at breakfast by Pavel Nikolaevich Mikhailov (1820); “Ari’i - Chief of Otahiti”, Pomare II as a young man by John William Lewin (1802); King Tapoa II by Sir Henry Byam Martin (1846/47); and “Objects of the Society Islands” by Jules-Louis Le Jeune (1823).