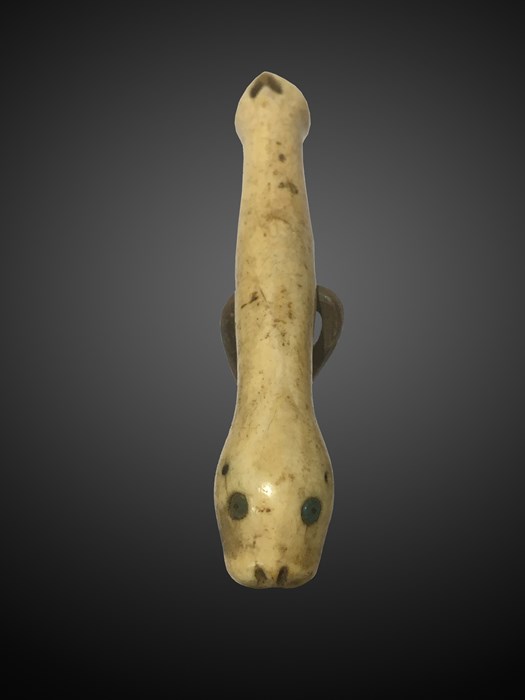 E 248) A superb drag handle or toggle carved as swimming seal. The naturalistic head has blue glass trade beads with seal or walrus moustache pupils. The face is sensitively carved offering a marvelous example of early Eskimo carving show the sense of observation and quality of hand of the artist. The joint, rear flippers are pierced through vertically. The remains of the walrus or seal skin rope is still attached with its original knot. Toggles of this type were often used to pull the drill thong from either side when using a two-person pull-drill. One man pulling the thong in one direction while he other held the drill and pull in the opposite direction. Point Hope, North Alaska. Walrus tusk (Odobenus rosmarus divergens) with a superb patina of age and usage, glass trade beads, skin and whiskers. 9,7 cm. 18th/19th century.

Provenance Provenance: Dr. John Beach Driggs collection. Driggs was an Episcopal missionary physician and educator who served in Point Hope, Alaska, between 1890 and 1910 as the first missionary in the far north. By family descent. Skinners Auction, 2019. Ex private French Collection.