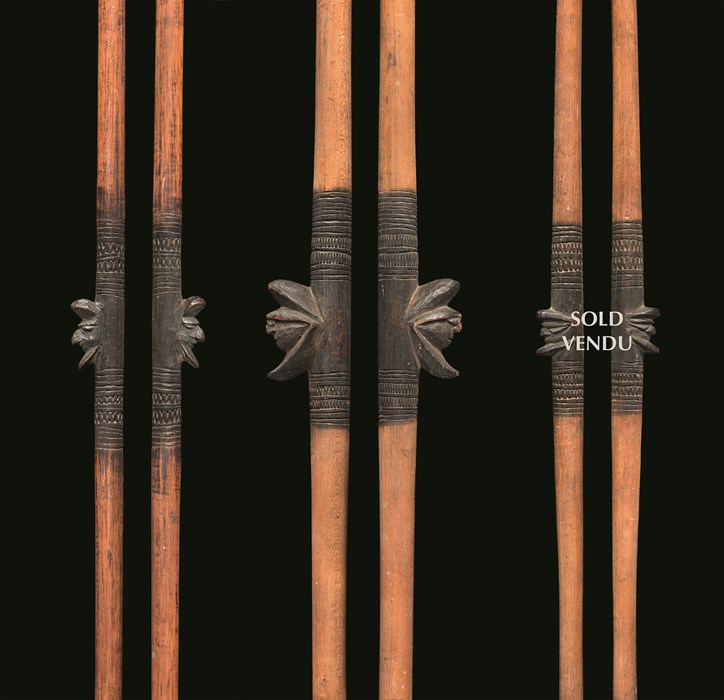 Weapons of this caliber and quality would be the property of a chief. New Caledonia, Melanesia. Wood with burnt bancoul nut blackening. 236 cm, 247 cm, 188 cm. 19th century.

There are two types of spears: spears for war and those for ceremony. Spears destined for war are monoxyl and straight and are carved from a hard, brittle wood which shatters and causes serious injury. Ceremonial or "ritual" or parade spears are considered prestige weapons and are used as gifts in "custom" exchanges. The simple ceremonial spear is decorated with a small section of bamboo covered with woven fiber or trade cloth which recalls the kanak money wallet. The carved parade spears like those illustrated here have a small face, a larger face or several, a single small figure or several figures. The pointed chin of the face has the characteristic of being carved towards the point, that is to say towards the receiver to whom the spear will be offered.
Source : http://collections.museenouvellecaledonie.nc/fr/search-notice/detail/0w4fal3g7y5lsitkqvjwnchisaabyq9q53iv0sb3yt0jnirav0?search=lance&slug=objets-kanak