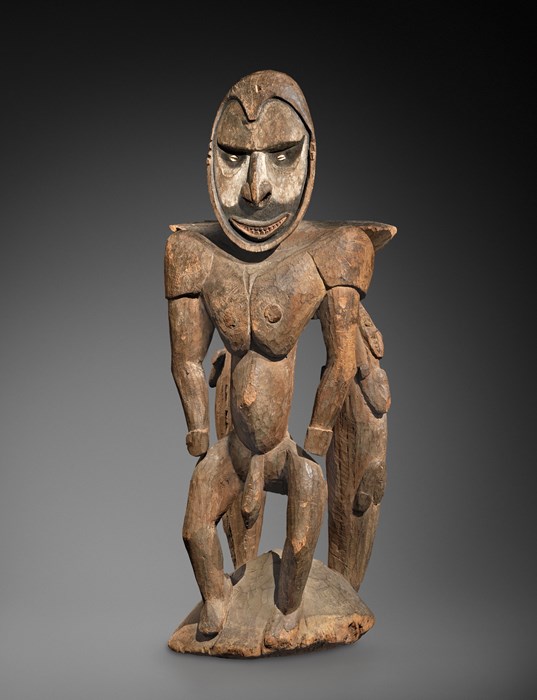 A very important, fine, and old "orators stool" or teket.


Provenance Field collected by Oscar Meyer & Bruce Lawes circa 1956/57. Two views of the piece show it in transit on the expedition's cargo-canoe on Chambri Lake.

Sold by Harry Franklin, Los Angeles. Formerly in the collections of Kleinmann, a Parisian modern-art dealer, then sold at his estate sale at the Hotel Drouot auction house circa 1970 by the auctioneer Maurice Rheims with Jean Roudillon as expert. Purchased at the sale by the noted French collector Dr. Maillant of Neuilly sur Seine. Subsequently sold in his estate auction, Hotel Drouot, Paris. Laurin, Guilloux, Buffetaud, Tailleur Auctioneers. 21 June 1993, lot 30.

The decor is composed of a large, powerful, standing male figure with a well developed musculature. The plateau or "seat" which juts out from the figure's back is supported by a pair of arched legs each carved, in high relief, with a head-to-toe crocodile. A conical base supports the figure and arched legs. The figures face is carved in a highly expressive manner: the eyes are slightly slanted and inset with cowrie shells; the nose is large and the septum is pierced; the mouth is carved in a wide toothy grin.

The "orators stool" is more aptly described as a debating pulpit or lecturn. It is amongst the most important and prestigious treasures of the Middle Sepik cultures. The figure represents the wagen, or central spirit - the primeval creator. The debating lecturn is centrally placed during the great geneological debates that are a major part of the mens socio-cultural order. The clans sit in a square or circular formation around the lecturn and the men speak in turn. The speaker either uses a small bunch of sacred leaves with which he strikes the plateau at each important point in his speech or the orator places an individual leaf on the plateau when punctuating his discourse.