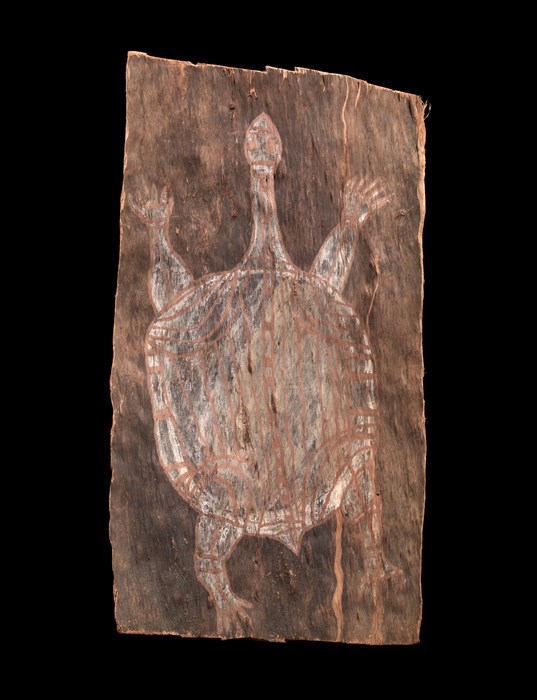 This painting, representing a long necked turtle, once decorated the inner walls of a wet weather bark hut in a remote area of the Australian bush. Totemic images like the turtle, crocodile, kangaroo or fish were often painted directly on the inner panels of the eucalyptus bark huts and shelters the Aboriginals erected during their peregrinations.

This is a bark of not only very high pictorial quality but it is of historical importance as well being that it was collected in the field in 1956 by Dorothy Bennett and has Bennett’s collection no "12" on recto. She was a renowned pioneer, along with the legendary James Davidson in collecting and bringing aboriginal artwork to the public. Works from Bennett’s collection, as from that of Davidson, found their way into many important early collections of aboriginal art, including the Australian State collections.

See the early photograph by Wright & Son from 1871 showing a bark shelter.

Dorothy (née De'Ath) married Alfred John Bennett, with whom she had two children. She came to the Northern Territory as a medical secretary with a team lead by Sydney surgeon Dr Stuart Scougall, studying orthopaedic problems in Central Australia and Arnhem Land. In her spare time Dorothy sought samples of Aboriginal art for the New South Wales Art Gallery. In 1959, Qantas asked Dorothy and Dr Scougall to gather a small Aboriginal art collection to tour Japan. Dorothy the "art hunter" would take a rifle, extra fuel and plenty of water when she ventured on collecting and buying paintings expeditions, travelling over rough bush tracks and through deep rivers for up to eight months each year then returning to exhibit the works in the cities of Australia. Dorothy collected not for her own profit the emphasis of her work was always on helping artists to exhibit and sell their work themselves, locally and overseas. Dorothy worked with gallery operator Shirley Collins organising exhibitions in the 1970s and 1980s. In 1972 she became consultant to the Aboriginal Arts Board. She became a field officer and adviser for Aboriginal Arts and Crafts Company in 1973. Since 1986 Dorothy Bennett worked independently among artists, recording their mythologies and collecting their works. She was an authorised consultant and was a member of the North Australia Research Unit attached to the Australian National University and was a federally appointed Norther Territories art valuer.