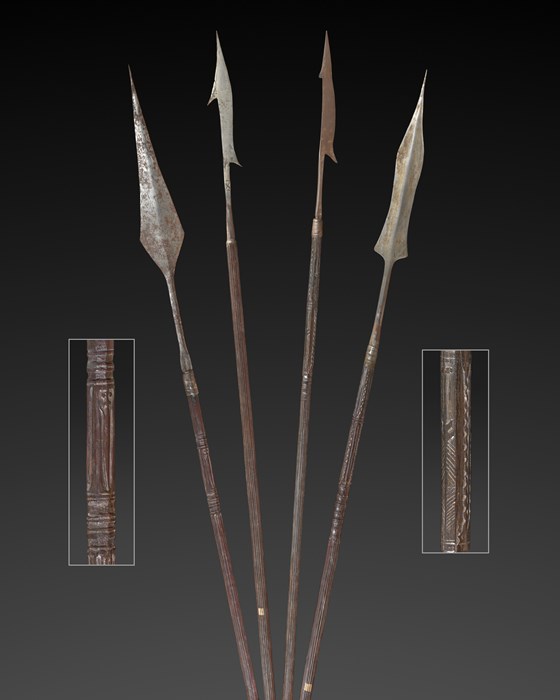 A set of four fighting spears with indigenous forged iron blades. The shafts are carved with classical Korwar ornamental motifs - two spears have deeply incised Korwar ancestor faces just below the blade (A & C). It is of interest to note that the blades of these spears are forged in the Indonesian fashion using the fold and hammer technique to create a multi-layered blade of a style known as pattern Damascus. Korwar Area, Vogelkop Peninsula, Indonesian New Guinea, Melanesia. Hard wood with a glossy patina of age and usage, and locally work iron (one shaft cut in middle and reassembled with bronze sleeve). 249 cm longest & 230,5 cm shortest. 19th century.

It is important to note that the cultures of the entire Island of New Guinea did not use metal in their historic development. They were and in some cases still are a Neolithic culture using stone or shell for their tools. Metal and its manufacture and use are imported technologies via Muslim blacksmiths traveling in from South East Asia in the late 17th and early 18th centuries. Thus these four spears with their locally made blades are of great rarity and very few are today in museum collections. See the image below made on the voyage of Dumont Durville showing a Korwar forge in use.

In 1901 army physician Gijsbrecht van der Sande returned from the Aceh War in one piece. He was knighted for his contribution to this war within the Dutch Colonies, being waged against Aceh pirates to secure shipping in the strait of Malacca. On his return to Europe, he studied to become proficient in photography and physical anthropology. He learnt the intricacies of skull measuring in Zurich, Switzerland from the well-known anthropological expert Rudolf Martin. This training is paid for by Treub & Co in preparation for the expedition that they were funding. The seven-month-long expedition provided Van der Sande with all he hoped for: A combination of an academic, yet adventurous expedition. As was the case in Acheh, he also ended up with war injuries in New Guinea. But this time he had to remove arrow heads rather than bullets. During this expedition Van der Sande was absolutely in his element and he was always in a good mood, something which the other members of the expedition really appreciated. Staying in a good mood was sorely tested at times. On some days in New Guinea, the jungle was flooded and the researchers had to climb onto floating logs or had to wade through the mud right up to their middle or higher. Van der Sande was not perturbed by this, not even when he went under twice on one day because he had slipped off a log. He remained chivalrous and helpful in difficult circumstances throughout the journey.

He did record his findings in a 400 page port folio full of photos and coloured lithographs. The entire collection of more than 900 artefacts was transported to Europe, where it was then described and classified. Later on, at least one third was returned to the Dutch East Indies. These items were housed in the Museum of the Batavian Society, now the Museum Nasional Indonesia. The rest of the collection is permanently kept in the ‘Rijksmuseum voor Volkenkunde’ (National Ethnographic Museum) in Leiden, the Netherlands. In 1907 a special exhibition of the ethnographic collection from the North New Guinea Expedition was staged in the then Ethnographic Museum in Leiden. Van der Sande died unexpectedly in 1910 at the age of 47.
Biblio.: Duuren, David van : OCEANIA at the Tropenmuseum. Royal Tropical Institute KIT publishers, 2011.

"…Towards Geelvink Bay the lance again occurs more frequently, and thus the collection contains some lances (N° 740—743) of Wâri of heavy palm wood, and beautifully carved, like those mentioned by DE CLERCQ and SCHMELTZ [1893, 144, 145] of Korido, Abëré and Wosnik. They were much prized by the inhabitants; who would not part with the finest specimens. It was said that the iron head was the work of the Wâri people themselves. Barbs made in the wood of the lance, close to the iron head, prevent the attacked person from catching hold of the weapon ; otherwise the lance is octagonal or round, and generally ribbed lengthways. The figures on N° 741, have entirely the Geelvink Bay type. The lance of Inagoi (N°. 744, PI. XXVII, fig. 42) has a striking resemblance to the one of Ansus [1. c, 145, N°. 650, PI. XXVII, fig. 11]…"