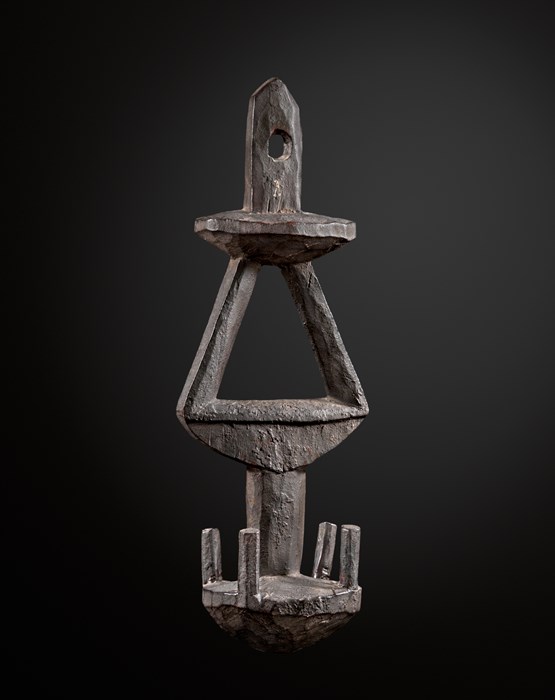 A basket-hook or ililili. The central section is a rare stylized representation of the celebrated itagaga, the gigantic, horned mast-head of the tongiaka, the great ocean-going, double-hulled canoe. Hooks of this type were used by the Fijians to suspend either food baskets or cérémonial items in prder to preserve them from vermin. A hook of this caliber and stylistic representation can only have belonged to a man of great importance. Fiji Islands, Polynesia. Iron-wood,vesi (Intsia bijuga), with a thick crusty patina. 35.5 x 12.1 x 7.2 cm. 18th/19th century.

Provenance Formerly in the collection of Captain W. Campbell Thomson (1851-1934). Bears the Captain Thomson inventory Nº 1, collected in Fiji before the end of the 19th century. Most probably an item given to Thomson by the great Chief (and subsequently King) Cakobau as most of the fijian material in the collection is described by Thomson as gifts from Cakobau with whom he was reported to be very friendly. Sold at the Thomson Collection Sale at auction by Pickles & Co., Sydney Australia, 5th & 6th September 1986, lot number 87, illustrated page 31 of the sale catalogue. Originally purchased from Alain Schoffel. Ex Coll.: Bruno Gay, Paris.

Literature: See the early photo of a Fijian canoe under sail to view the horned mast-head.