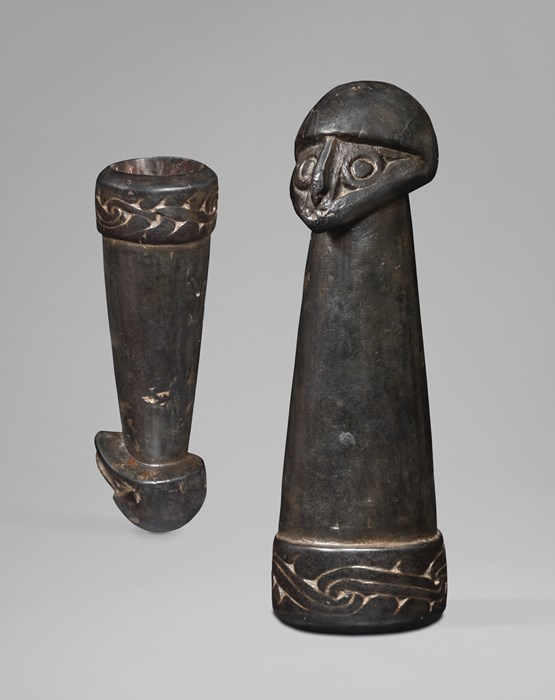 A rare and finely minute betel nut mortar carved with an inverted human head as the finial.

The triangular face has a pointed chin and lightly engraved mouth. A band of spiral carveing surrounds the mortars mouth. These mortars were used by people who had difficulty chewing the hard areca nut of the betel palm. The mortar was used to crush the nut into a paste and mix it with the lilme and pepper leaf – making betelnut a narcotic chew used in Melanesia and South East Asia. Northern (?), Massim Area, Papua New Guinea. Ebony wood. 10 cm. 19th century.

The term Betel Nut is a missnomer. The nut is the fruit of the areca palm (Areca catechu), known as buai in the Massim language. However, is not a true nut, but rather a fruit categorized as a berry.

The Areca “nut” is chewed with betel leaf (Piper betle) and lime (calcium hydroxide) as a mild stimulant, causing a warming sensation in the body and slightly heightened alertness, although the effects vary from person to person.

The nut is used in dried, cured (smoked), and fresh forms. When the husk of the fresh fruit is green, the nut inside is soft enough to be cut with a typical knife or with the teeth. In the ripe fruit, the husk becomes yellow or orange, and as it dries, the fruit inside hardens to a wood-like consistency. At that stage, the areca nut cannot be chewed but must be crushed in a mortar.

Usually for chewing, a quantity of the nut is put into the mouth along with lime and the fruit or leaf of the betel plant which has a fresh, peppery taste, but it can also be bitter to varying degrees depending on the variety.

The areca nut contains the tannins arecatannin and gallic acid, a fixed oil gum, a little terpineol, lignin, various saline substances, and three main alkaloids : arecoline, arecaidine, and guvacine - all of which have vasoconstricting properties. The betel leaf chewed along with the nut contains eugenol, another vasoconstrictor.