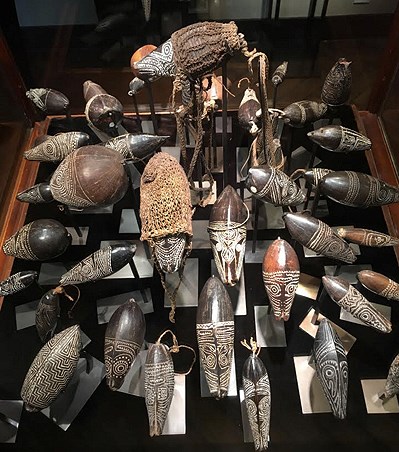 Carved from a species of "dwarf" coconut, the charms or amulets are polyiconic representing multiple imagery composed of human faces, figures, pigs, crocodiles, fish and floral as well as geometrical designs. Used to make magic as well as to protect against evil spirits and magical spells, the amulets are most often worn on strings tucked into the mans armpit or suspended from the neck or even the nose. Often they are used as added adornments to the great gope ancestral boards from which they hang in a bunch from the nose and lateral holes. Papuan Gulf, PNG, Melanesia. Coconut, fiber, wood, shell and various materials. Various sizes. Circa 1800 to 1900 AD. Private collection.

Marupai have in the past been described as a New Guinea hunting charms and although not incorrect, it over simplifies their function. Marupai are personal spiritual charms capable of several functions.

1. They are a protective charm, protecting the owner from being attacked through the spirit world by sorcery.
2. They act as a messenger to send and deliver messages to other people who have marupai through the ether of the spirit world.
3. They enable a sorcerer to travel at high speed (fly / magically transport themselves) from one place to another.
4. They bring game such as pigs, possums and cassowary close to the village making them easier to catch.
5. They are used to confuse an enemy during battle, by making an individual appear to be many people or make them appear to be where they are not, so that enemy arrows miss the target.
6. They also have a less savoury use in being able to be sent out to attack and kill an enemy through the spirit world when in the hands of a powerful magician.
7. Some marupai (Overa Hora) were hung from the nose of Hohoa Boards to decorate them.
8. They are sometimes used to control the weather. They can make the weather stormy when the owner is grieving the death of a relative.

When sent on a mission (cast as a spell) on a person the spirit of a marupai makes a repetitive high-pitched sound as it flies through the night in search of the enemy.

According to oral history the Marupai cult originated in Ihu / Orokolo area. Marupai is the Orokolo/ Ihu name for this object but it is also known as Lai Kakar Re in East Kerema and Kaiya Muru or Naharo in Opau. No doubt it has other names in other languages. The way a marupai functions is connected to the concept of Imunu. Imunu is an animist belief where all things of significance contain a being, a spirit, a life force or soul sometimes it is inherent and at other times objects can be instilled with this essence. To a Papuan Gulf inhabitant Imunu is very real and tangible; it is not only a conceptualization Some Imunu is imbued into a marupai when first made because it was made by an important magician or village chief, while following strict taboos, including fasting and abstinence. The Imunu is then increased through feeding the marupai. Traditionally the simplest way to increase Imunu is through the acquisition of someone else's Imunu via cannibalism. Marupai had their Imunu increased by feeding dried human flesh teeth or bone into their "mouths" along with magical herbs and bark. Once fed a marupai is hot, charged, filled with Imunu. The owner can then send the spirit of the marupai to do his bidding by ritually evoking its name. To a person in the Gulf of Papua a marupai that is charged with Imunu is alive, a being unto itself. As a being a marupai has personal needs and therefore needs to be fed regularly, bathed using coconut oil, treated with due respect and revered appropriately.
In former times when the Houseman Eravo was still the centre of village life it was only the most powerful of sorcerers who would openly wear marupai. These marupai were the ones used for less offensive practices like hunting and protection. If a powerful sorcerer advertised he had marupai he was more likely to have people pay him to practise his trade.

The vast majority of marupai were and are kept secret being concealed by their owners especially the most dangerous ones, being capable of causing death, for fear of payback. Due to their power marupai are predominantly only owned by initiated men. It is not uncommon for a man to own more than one marupai and they are usually inherited from an uncle along with the knowledge of how to control them. Individuals who were not lucky enough to inherit a marupai could purchase one from a renowned sorcerer. If an uncle wished his nephew to inherit a marupai but the nephew was not yet old enough, the marupai would be left in the care of the village's chief sorcerer until he came of age. Marupai are also commonly put into a string bag okaoka in Orokolo and have a large red seed also in a string bag called hepahepa and a piece of bark paiha tied to the bag. Hepahepa is used only when the owner feels in mortal danger at which time he crushes the seed and consumes the pith inside. The seed makes him belligerent and assists in spiritual communication with or through the marupai. The cinnamon smelling paiha bark is the regular food for the marupai and also acts as a tongue-like stopper preventing the contents from spilling. If the owner of a marupai dies before he has had a chance to bequeath his marupai, it is believed that the marupai also dies with him. It is not unusual for a dead sorcerer to be buried with his marupai. Major damage to the marupai is also believed to cause the marupai to die especially if the shell is so damaged the contents can escape. Removal of the material from within a marupai causes it to become dormant until it is fed again. Like many of the world's ancient works of art, Gulf of Papua art is essentially religious in nature. The faces on marupai, hohoa, bullroarers, drums and masks represent particular religious mythical heroes. Not all these ancestral heroes are human with many being able to take the forms of crocodiles, lizards, birds, pigs and even natural phenomena such as whirlpools, they should nevertheless all be considered deities. The number of these deities throughout the Gulf of Papua probably number around one hundred and are usually mythical heroes from specific clan legends that in the clans distant past performed supernatural feats. These mythical heroes are best identified by the design around the eyes because although other features may differ from object to object a particular mythical hero will always share the identical eye design.

Marupai are a New Guinea talisman in so far as they are portable, belong to individuals rather than a group and can be carried on your body. All marupai have 2 eyes and are as near symmetrical as the carver is able. They are all pierced at the base to allow them to have a piece of string attached so they may be carried. They all have a mouth with a hollow behind in which substances can be placed. They are most commonly made of dwarf coconut but can also be made from wood. Many have a "third eye" or navel because Orokolo people believe that astral travel and spiritual communication occurs through the navel which is why it is also almost always depicted on Hohao / Kwoi boards. The majority of marupai have most of the carving on the upper half and this is because the bottom remains extremely hard and difficult to carve even after the dwarf coconut has been buried in the mud to allow it to soften. The designs on a marupai are clan specific and may not be copied by another clan. The use of marupai is still on going in the Gulf but it is rapidly dying out as the old spiritual beliefs and practices cease as they are replaced by Christianity. A famous sorcerer also pointed out a more pragmatic reason for the practice of this culture dying and that is, it just isn't as easy to obtain the flesh of you enemy as it used to be.