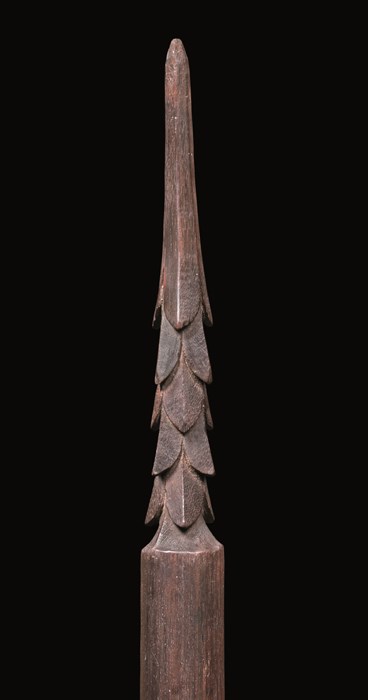 An extremey rare Ihe or Hawaiian war spear. The tip is composed of a long hexagonal tapered point over 5 rows of triple, faceted barbs (detail shown). The shaft widens ever so slightly at the middle before tapering down to a long point (now partially missing). It is reported by Mitchell (1982) that “the warriors hurled these weapons at times with an underhand throw, although sometimes they held them firmly with the point forward and charged the enemy ... In battle, soldiers used their ihe to ward off spears thrown at them, or they caught the spears ... and hurled them back at their opponents.“ Adrienne Kaeppler has recorded 8 ihe as provenanced to Captain Cook’s 3rd voyage. See an ihe in the National Museum of Australia, Canberra, Inv. N° Oz 255, another in the Ethnographical Museum, Neuchatel, Inv. N° MEN V.954, as well as one sold at Bonham's, New York 2008 and another at Christie’s, London in 1987.

Provenance Ex coll. : Australia then private collection in the UK.

Literature: See page 209, spear N°3, inv. BrM Oc 1946,01.1 for an identical example collected on the third voyage of Captain Cook in 1778-79 in LINKS TO THE PAST, by Wendy Arbeit. University of Hawaii Press, 2015. With my thanks to Wendy Arbeit for having pointed out the comparable spear in the British Museum.

Hawaii, Polynesia. Wood (either kauila or koa) with a fine patina of age and wear (one barb restored and distal tip missing). 174 cm. 18th century.