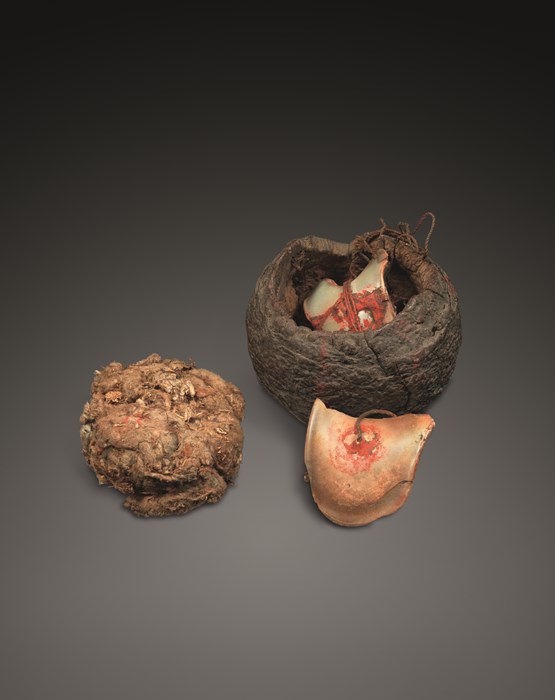 These extremely rare jewels are worn suspended by bush-string on the ears of the very high-ranking men (clan elders) and while indicating rank they are also used in magic. The nautilus (nautilidae) shell segments are of course imported from the coast, which is very far away. The complex trade routes, which feed the Highlands with goods from the Lowlands and coastal area's are long and tortuous to navigate. Thus mother of pearl is highly prized in the Highlands as it is extremely valuable and was difficult to obtain in pre-colonial times. Magical incantations and spells were made over objects such as these ornaments to ensure that more pearl shell would arrive safely in the mountain villages. The dried fruit, which serves as the container is carefully emptied out and painted with red lines, a sacred color as are the shell ornaments, which are packed with clay on the rear side. The container is closed off with packing made from accumulated spider web and grass burrs.
One other field collected example is in the private collection of a French Museum curator.

Provenance Ex coll. De Bellefon. left on deposit for sale to the MNAAO in 1994; not acquired by the museum. There is a Musée National des Arts d'Afrique et d'Océanie deposit number painted on the inside rim of the fruit and on the rear edge of each of the two ear ornaments : consecutively MNAAO D.94.1.3.a, MNAAO D.94.1.3.b & MNAAO D.94.1.3.c. Each component bears a sticky plaster inventory label numbered consecutively DMB3a, DMB3b, DMB3c written by Philippe Peltier, the acting curator of Oceanic art at the MNAAO of the time.