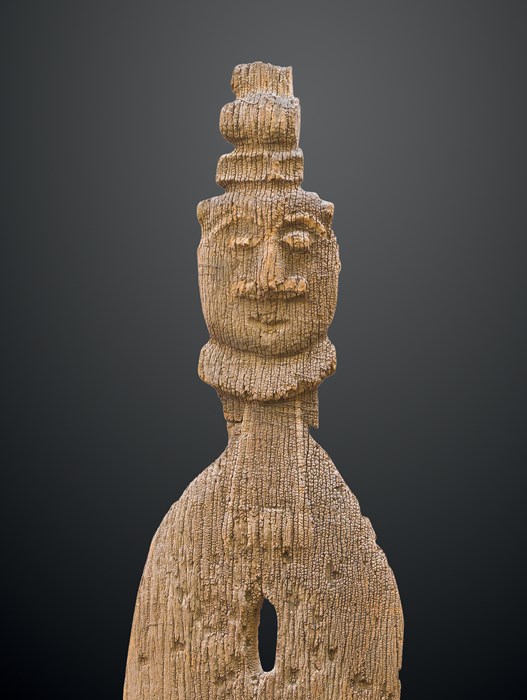 A superb chiefly roof spire carved in the classical manner with a large strongly stylized human face centered over an elongated oval "body" on a long thick post. The effigy of the chief wears an important multi-segment pectoral ornament carved in high relief. There is a natural aperture in the torso. Kanak. New Caledonia, Melanesia. Wood (houp) with a weathered and ravined patination due to lengthy exposure. 217 cm height. 19th century or earlier.

Provenance Ex collection Jacques Cheval.
Two brothers, Timothée (1814-1881) and Hippolyte Cheval (1828-1896), left France and their native Normandy for Australia in 1852 shortly after the coup d'état of Napoleon III. They moved to Sydney and opened the Café Français, an important French restaurant on George Street. New Caledonia became French in 1853. On July 13, 1861, in Sydney, Hippolyte married Ellen O'Donoghue (1841-1928), a young Irish woman who had recently arrived in Australia. Timothée, the eldest, made the request, on November 28, 1861 to the Minister of the Colonies to acquire 1500 hectares in La Tontouta in the brand new colony of New Caledonia. On July 18, 1862, Timothée and Hippolyte the chartered ship la Gazelle along with their families and friends landed in New Caledonia and began to grow sugar cane. Three generations later, Jacques Cheval (1931-2018), descendant of Hippolyte and Ellen, became an interior decorator in Noumea, and a passionate collector of the art and history of New Caledonia. He was vice-president of the Société d'études historiques de Nouvelle-Calédonie and a shareholder in a contemporary art gallery in Paris. The collection was built up by Jacques Cheval, piece by piece, throughout his lifetime and travels, with the eye of the connoisseur and the heart of the lover. Of all he owned, this collection was the most dear to him.