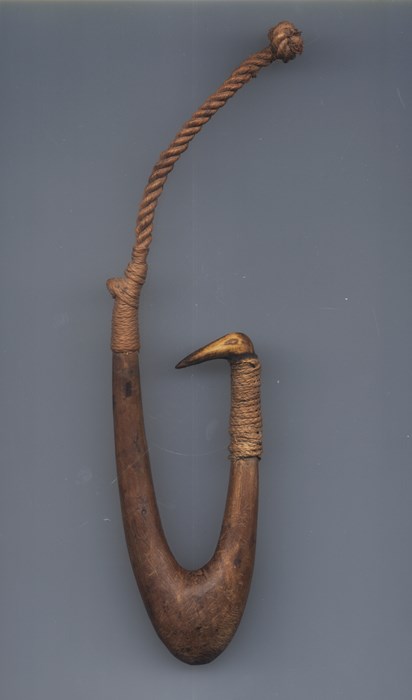 A rare and small, fish-hook for catching the palu or ruvettus pretiosus (known as the oilfish), a rare deep water fish of the snake mackrel familly. The flesh of the palu is highly purgatory and is very important to certain rituals and native medications. The point of the composit hook is "jointed" to the tip of the shank and tightly lashed. The original leader of thick coconut fiber rope is beautifully attached to the shank with fine sennit lashings. Probably south western Polynesia (Cook Islands ?), Polynesia. Wood and fiber with a patination of age and wear (fiber glued at point). Hook 14,5 cm, with leader total of 25 cm. 19th/20th century.

Literature: The Ruvettus is a deep-sea fish whose oil is a purgative. They are caught with a peculiar fishhook used throughout the South Seas. The Ruvettus hook is made from the fork of a bush or tree, the trunk furnishing the shank leg and the branch the barb leg. The barb is separately made from a nearly right-angled fork. It and the top of the barb leg are spliced to fit and the barb is lashed onto the top of the barb leg. It is fitted to point obliquely inward and downward but slightly to one side of the shank. The general plan of the hook is uniform through the whole of the South Seas, but the details vary with every group, and particularly in form, splicing and lashing the barb. The Ruvettus is a member of the family Gempylidae, living or at least caught at depths from 80 to 400 fathoms--however, most commonly reported from the latter depths. It is caught only on moonless and windless nights, on the peculiar hook described above, and with a flying fish or some other succulent fish for bait. The bait is lashed fast to the top of the barb leg leaving the point of the barb free. Ruvettus has a large mouth and with this it takes in both bait and the barb leg. The curious barb then catches the fish in the angle of the jaw or among the gill arches and holds it securely.
Excerpt from 'The Distribution of Ruvettus, the Oil Fish, Throughout the South Seas, as Shown by the Distribution of the Peculiar Wooden hook Used in its Capture' by E. W. Gudger and published in 'The American Naturlist', Vol 62, No. 682, Sept-October 1928, pp 467-477. (https://catalogs.marinersmuseum.org/object/CL7234)

See : Wooden hooks used for catching sharks and Ruvettus in the South Seas; a study of their variation and distribution. Anthropological papers of the American Museum of Natural History; v. 28, pt. 3. Gudger, E. W. (Eugene Willis). 1927.

The Journal of the Polynesian Society, Volume 38 1929. Field notes on the culture of Vaitupu, Ellice Islands, by Donald Gilbert Kennedy, p 1-99