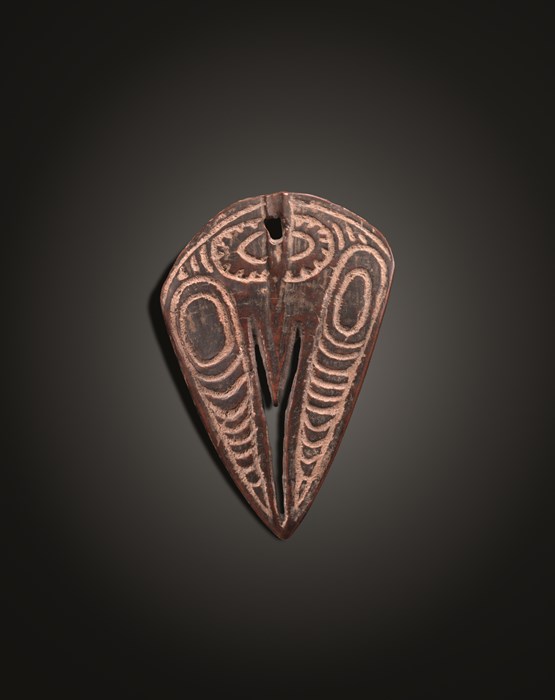 Stylized representation of a vulva worn by travestied men during the Naven ceremonies. The two sides of the vulva are composed of stylized bird heads with the triangular clitoris in between. Iatmul language group, Middle Sepik, PNG. Coconut and lime. 9 cm. 19th/20th century.


Provenance Ex coll. : The French artist Fernand Devèze. then by descent to his nephew Mr. Bergognon. It is probable that Devèze acquired this amulet through the Parisian dealer Marie-Ange Ciolskowska, as she was one of his main suppliers or through his friend and mentor André Derain.

Fernand Devèze was born on December 22, 1895 in Avignon, his father was a butcher. He lived in his youth at 50 rue des Fourbisseurs. A disciple of Jules Flour at the Beaux-Arts school of Avignon, he was essentially a landscape painter. He exhibited from 1922 to 1938 at the Salon des Indépendants in Paris and the Salon des Tuileries from 1932 to 1936, in relationship with the group of Treize and Independents Avignonnais. Essentially known for his painting and his friendship with André Derain, Fernand Devèze was in the years 1920-1950 a discreet but passionate collector of the so-called "primitive" arts until in 1958, he became blind, which put a forced end to his two passions, painting and his collection. The three-dimensional character of the sculptures from Africa and Oceania nevertheless allowed him to enjoy them in a tactile manner until the end of his days. He died at his home at 43 rue Four-de-la-Terre on July 22, 1962.

Literature: The Iatmul naven is a ritual event whose name means “going on view”. During naven, men and women mimic and mock each other, variously laughing at the social conventions of gender and crying at their psychic consequences. Men display their envy of female procreative ability; women mock that yearning and reveal themselves to be figures of disgust and repulsion. Both men and women transvestite themselves donning the others apparel including mock genitals and breasts. Female “mothers” symbolically squirt menstrual blood and fling feces onto their “children.” Mother's brothers humiliate their nephews by “grooving” their buttocks over the nephews' thighs and legs, evoking anal eroticism even as they performatively cast themselves in the role of birth mother. Spirit figures emerge from cult houses and sway lewdly for beholders. It is as though the whole culture periodically rescinds the mores of routine social life to reveal the confusion and turmoil roiling beneath the surface. It is argued that naven makes visible a partially hidden dialogue in Iatmul culture, a tension between (positive) notions of nurturant motherhood and (negative) notions of grotesque maternal excess. Naven appears to put the unconscious of Iatmul culture “on view”, an unconscious consumed by a persistently frustrated masculine yearning for and envy of female reproductive powers.
Naven is of course one of the most storied rituals in the annals of anthropological investigation, thanks to Gregory Bateson's epistemologically and ethnographically experimental 1936 account. The focal interest of Iatmul culture is the achievement of masculinity (male gender identity) vis-à-vis female motherhood; it involves Oedipal resentments and desires, incestuous fantasies, “womb envy”, sublimated homosexuality, and many other Freudianisms. Indeed, the artefacts of Iatmul culture - myths, architecture, everyday social practice - seem to lend themselves to this sort of analysis, as they are obsessed with gender, the body and sexual reproduction.
Ref. :
Bateson, G. : Naven : A Survey of the Problems suggested by a Composite Picture of the Culture of a New Guinea Tribe drawn from Three Points of View (1936). Stanford University Press, 1958.