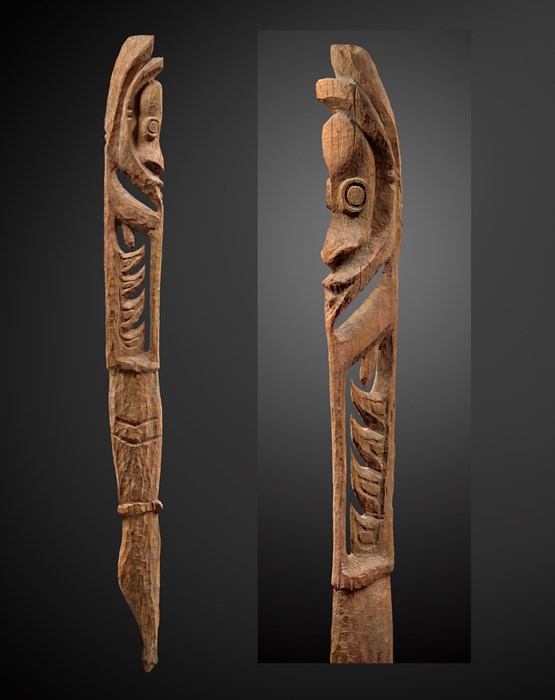 A very large aripa hunting and warfare spirit figure in the form of a stylized human figure in profile. The main elements of the figure other than the large powerfully carved head are reduced to essential identifiers : the torso is shown with four upward curving hook points representing the ribcage under a vertical « heart » protrusion; the shapely single leg shows a thick band worn at the knee. The head of this ancestral spirit figure is large and shown in profile nestled in a half-moon crescent frame supporting the ears. The face has a well-shaped, pierced nose, large concentric circle eyes and a pouting mouth. The neck offers a double notch of undefined purpose. These profile figures appear both in the Ewa pantheon as well as amongst the Yimar where they are better known as yipwon. Used in war related ceremonies these figures were « heated » and brought to life by rubbing them with the warrior’s blood and paint as well as offering ritual chants and ceremonies. After a victorious raid the figure would be « washed » with the victim’s blood and offered pieces of the body. This figure is exceptionally tall and extremely well carved. The hook points are incised as is the upper thigh to one side.
Caves of the Korewori, Ewa People, Inyai Village area, Upper Korewori River, South bank of the Middle Sepik River, PNG, Melanesia. Hard wood with traces of lichen and calcifications due to storage in a limestone cave. 196 cm. 14th/19th century or earlier (C-14 test pending). Ex coll. : Ronald Clyne, New York; Ann & Sam Charters, Connecticut (acquired from Ronald Clyne circa late 1960’s).

Provenance Ronald Clyne, (1925 – 2006) a commercial artist and notable book and record cover illustrator and designer made 12 trips to New Guinea to buy art, starting in the 1960s. He continued visiting up to the early 1970s, stopping after independence and the instauration of stricter export regulations in 1975. During this period and in following years Clyne acquired many of his pieces of New Guinea native art from two Catholic priests, both missionaries in different parts of the country. He would receive large crates of art works - keep what he considered the best for himself and sell off the other pieces to friends.

Ann Charters (b.1936) was professor of American Literature at the University of Connecticut specializing in the Beat Generation authors. She compiled Jack Kerouac’s bibliography and after his death wrote the first Kerouac biography (Kerouac: A Biography); published in 1973. She acquired this figure (and two others) from Ronald Clyne in the 1960’s upon its arrival in the shipment.

The strange figures of the Ewa, emerging straight from the visions, the imagination and religious belief of the Papuans of New Guinea, represent ancestors but also spiritual beings related to hunting and war.

They are the vestiges of another era - the one before the arrival of the western world on the shores of New Guinea. The interior of the island, largely unexplored until the second half of the 20th century, is still often accessible only by boat, on foot or by air.

These aripa - the vernacular and generic name of these carvings - figures and heads, were individually held by the Ewa population, who originally lived on the foothills from which spring the Moi and the Nai rivers (Nai being the local name of the Korewori River) south of the Middle Sepik, the great nourishing river of Papua.

When hunting game or raiding enemies, the owner of the sculpture called to the soul of the aripa with an offering, thereby ensuring its collaboration.

The sculptures also became commemorative monuments to their deceased owners and were kept in rock shelters and limestone caves scattered in the mountains, covered with dense rainforest, far away from the dwellings.

The Korewori River, a southern tributary of the Sepik River, was discovered in the early years of German colonial exploration at the beginning of the 20th century and then forgotten until the end of the 1960s. Just after the Second World War, the Ewa, living in an area of difficult access near the source of the Moi, were relocated further down towards the bank of the Korewori River (Nai), in order to facilitate control by the Australian colonial administration. The Ewa were forced to leave their sacred sculptures far behind them, physically and religiously.

The « Caves of the Korewori » (or Karawari), still filled with their treasure trove of Ewa sculptures, were fortuitously « discovered » in the mid-1960s by Ivan Salomon, a foreman working for a sawmill in Angoram. The mill was managed by Nils (Mads) Madsen, who subsequently bought and sold a large number of these aripa sculptures. Madsen died shortly afterwards in a plane crash on July 28, 1968. His untimely demise added to the aura of mystery that still surrounds these remarkable works of art, for little was known about the Ewa from an ethnographic point of view.

It is estimated that at least three hundred wooden sculptures were found in rock shelters and limestone caves near the Ewa villages of Inyai, Ratoma and Danyig by Madsen and others.

The Ewa sculptures, aged 400 to 600 years on average, and hidden for centuries in caves, were unveiled to the public for the first time in 1968 - the French dealer Maurice Bonnefoy of D'Arcy Galleries in New York had acquired a large selection of Ewa pieces and exhibited nearly 120 of them. Bonnefoy published the sculptures in his ground-breaking catalogue « The Caves of the Karawari », written by Professor Eike Haberland from the University of Frankfurt.

Subsequently, in 1971, the Museum für Völkerkunde in Basel - today the Museum der Kulturen - was able to acquire by public subscription 85 pieces from Maurice Bonnefoy for 1,500,000 Swiss francs.

Carbon-14 tests indicate that most of the sculptures date from the 14th to the 19th century, although some examples can be traced back to the 10th and 11th centuries AD. Thus, Ewa art is contemporary with our European Middle Ages.

These are the most archaic wooden art-works known in the Pacific - and they have reached us in a remarkable state of conservation. The extreme hardness of the wood, as well as the relatively dry and protected conditions of the caves, allowed these works of art to pass through time.

Ewa sculptures can be seen in many institutions around the world: at the Musée du Quai Branly in Paris; at the Metropolitan Museum of Art in New York; at the National Gallery of Australia in Canberra; at the St. Louis Art Museum in the United States; the M. H. De Young Museum in San Francisco; the Museum für Völkerkunde in Frankfurt; the British Museum in London, and of course the Museum der Kulturen in Basel ...