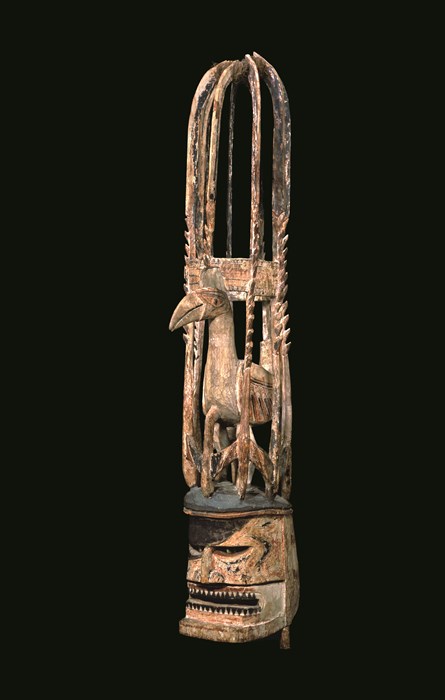 A large and powerfull mask for the malagan ritual representing a grimacing ancestor's head surmounted by an imposing hornbill bird surrounded by a cage made of sharks. These large and heavy masks are called matuai and are used during taboo rituals at the end of malagan ceremonies related to funerals. New Ireland, Melanesia. Wood (Alstonia), shells and pigments. A fine patina of age and wear with minor old damages and repaires. 125 cm high. Late 19th to very early 20th century.

The Galerie du Dragon was located at 19, rue du Dragon, in the sixth arrondissement of Paris. It was primarily a cultural site associated with the Librairie du Temps (the bookstore of Time), created and animated by Nina Dausset and Manou Pouderoux, between 1946 and 1954. Early on, exhibitions are regularly organized, such as the one around the meeting between Jean Paulhan and Jean Dubuffet in 1950,

Thanks to the support of many artists, the young poet Max Clarac-Sérou (1930-2001) took over the lease of the bookstore and turned it into an art gallery as of 1955, and the Galerie du Dragon became a hotbed of discoveries and contacts. Young poets the likes of Edouard Glissant, Alain Jouffroy or Michel Butor encountered the elder writers like Henri Michaux or Gherasim Luca. They met artists, painters and visual artists, such as Giacometti, Matta and Victor Brauner. Strong friendships are born. Max Clarac-Sérou and Cécilia Ayala organized exhibitions on the new Paris school as well with notably the iron sculptures of Philippe Hiquely in 1958, later on contemporary Cuban art in 1961, and on the theme of solitude, and the body, in 1966, bringing together works by Balthus, Bellmer, Caesar, Cremonini, Dali, Giacometti, Magritte and Matta who had numerous one man shows at the gallery from 1956 to 1964.