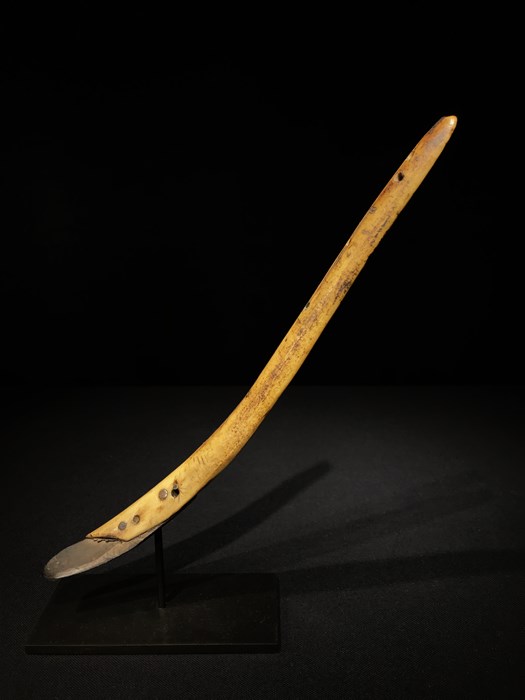 E 305) A “crooked” knife with a riveted iron blade. The handle has a few worn decorative designs engraved into the surface which where most probably artistic trials rather than a specific attempt to decorate the object. Several holes have been drilled through either to server as attachment points or possible the handle was used as an occasional fire-starter.

Crooked knives were used for shaping wood, bone and antler. The crooked knife has a small blade attached near the end of a long-curved handle. The knife is held with the fingers of one hand on the underside of the handle, and the thumb positioned on top of the blade in an indentation in the handle. The craftsman rests the underside of the blade against the object being worked and draws the knife towards the body while using the thumb on the hand holding the tool to check the depth of the cut. Alaska possibly from Point Barrow. Mid to the late Thule culture : 1500 - 1900 AD. 28 x 2,4 x 1 cm.

Leo Hansen joined the 5th Thule Expedition as filmmaker/photographer at Kent Peninsula where he was waiting for their arrival in November 1923. Rasmussen had requested a filmmaker from Denmark in a letter sent from Repulse Bay in January 1923. Hansen travelled across the Atlantic by ship landing in New York and then crossed Canada to Vancouver where he sailed on the Hudson Bay Company ship Lady Kindersley to Tree River, the Hudson Bay Company post; he finally arrived at the Kent Peninsula post on a small schooner in September. The Expedition lost no time putting Hansen to work documenting life in a Umingmaktormiut igloo village. He worked under extreme conditions between -40° c. and -50° c. and the camera would stop turning every 5 minutes. Hansen froze his fingers when he touched the metal camera. Hansen accompanied Rasmussen, Arnarulunguaq and Qavigarssuaq their Eskimo informants for the rest of the journey to Alaska. In Point Barrow, Alaska he had the opportunity of filming the whaler's festival.