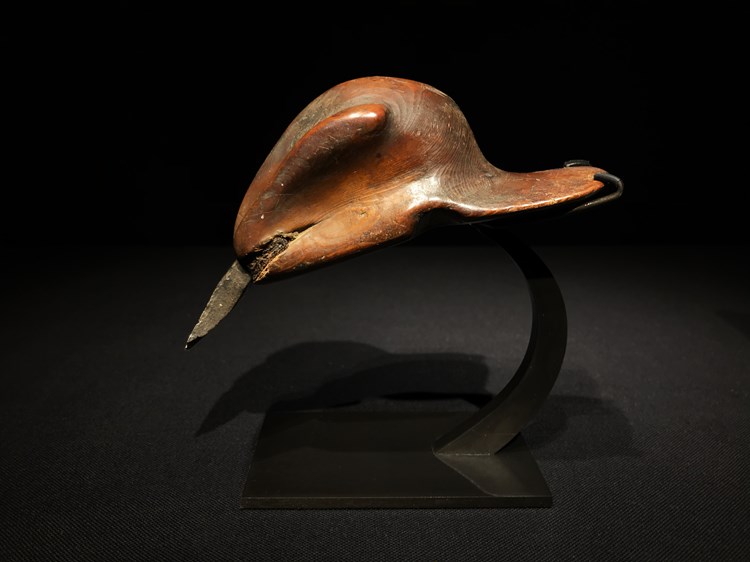 E 306) A wood handled skin scraper or ”ikun” with its original flaked and polished jade (nephrite) blade. Before the skins of warlrus, seal, caribou, fox and bear can be made into clothing, they must be treated. Otherwise, they will stiffen, rot or split with use. The lengthy process of scraping, wetting and re-scraping with the ikun is repeated until the skins reach the desired quality. The women, sometimes aided by the men, first employ a blunt-edged scraper – usually a cup shaped piece of walrus ivory to remove the meat and fat particles from the skin's inner side. This very hard work may take three hours. Once the tissues are removed, the skin is moistened, left for a day or so, scraped across the length and breadth with the ikun, gently stretched, then re-scraped with the ikun or ulu (womans cresent form knife) that gives the skin a fine, soft texture. Northern Alaska possibly from Utkiavwĭñ village area on Cape Smyth, Point Barrow. Mid to the late Thule culture : 1500 - 1900 AD. 14,5 x 8,5 x 5,5 cm.

Leo Hansen joined the 5th Thule Expedition as filmmaker/photographer at Kent Peninsula where he was waiting for their arrival in November 1923. Rasmussen had requested a filmmaker from Denmark in a letter sent from Repulse Bay in January 1923. Hansen travelled across the Atlantic by ship landing in New York and then crossed Canada to Vancouver where he sailed on the Hudson Bay Company ship Lady Kindersley to Tree River, the Hudson Bay Company post; he finally arrived at the Kent Peninsula post on a small schooner in September. The Expedition lost no time putting Hansen to work documenting life in a Umingmaktormiut igloo village. He worked under extreme conditions between -40° c. and -50° c. and the camera would stop turning every 5 minutes. Hansen froze his fingers when he touched the metal camera. Hansen accompanied Rasmussen, Arnarulunguaq and Qavigarssuaq their Eskimo informants for the rest of the journey to Alaska. In Point Barrow, Alaska he had the opportunity of filming the whaler's festival.