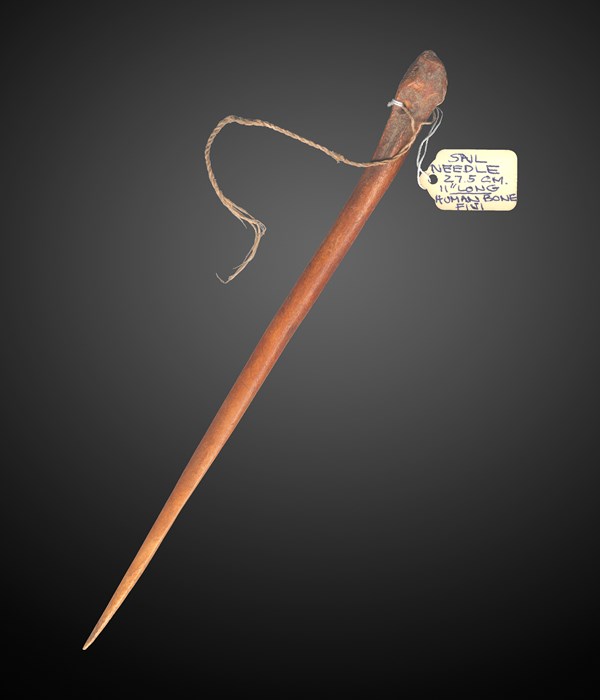 A sail-making needle or saulaca. This example is unusual as it retains a small section of the bone’s articulation at the thread-hole extremity. Fiji, Polynesia. Human bone (fibula ?) with a fine patina of age and usage. A short length of native fiber is still attached to the thread-hole. 27,3 cm 18th/19th century.

Dr. John Rabe, Dental Surgeon and Conchologist, was drawn to the central and southwestern Pacific Islands and eventually to Australia, to New Guinea, Siam, Java, Japan and China, in a restless effort to restore his broken health. An all-round master of oral surgery, orthodontics and periodontics, he practiced in all of the countries where he alighted and also aboard the scores of vessels (both sail and steam-driven) which carried him upon his wanderings. To augment his income from dentistry he also collected both seashells and achatinellids for commercial trading as well as to supply specimens to the curators of conchological museums. His meticulously kept business accounts reveal that he also did much trading in beche-de-mer, artifacts of archaeological value, in tobacco, dry goods, tapa cloths, mats, et cetera. A man endowed with very superior powers of observation and a most sensitive and conscientious recorder of details, Dr. Rabe left for posterity a treasure trove of journals essentially free of romantic distortion, rarely prosaic and never redundant, providing unique, first-hand accounts of most of the Pacific Ocean cultural milieus which in the latter half of the 19th century were undergoing vast cultural and political mutations caused to a great extent by the commercial and colonial ambitions of many Western powers. Often as the only medic in an isolated region or on board a vessel, he played the role of physician as well as dentist. The biographical record is so far sketchy. John Rabe was one of three sons of one William Rabe. He was born February 14, 1850, presumably in Cumberland, Guernsey County, Ohio. In 1869 he commenced his studies of dentistry at Coshocton, Ohio where he matriculated October 1869. He graduated in 1871. Forced by frail health and advanced age to retire from his practice in Oakland, California, he relocated to Calistoga, Napa County, California, early in 1912 where he began to build a substantial mansion in December 1912. Dr. Rabe suffered a series of cerebral strokes from which he died on January 4, 1914. He was buried in Oakland, California. Subsequently, the Oakland Museum of California (OMCA) acquired a substantial part of Dr Rabe’s collection described as : « The Pacific collection of ethnographic artifacts is one of the oldest in the Museum. It is based on approximately 220 private collections, the most notable being the John Rabe Collection. In the late 1880s and early 1890s, Oakland dentist John Rabe traveled throughout the Pacific, gathering materials from Australia, Micronesia, Melanesia, Polynesia, Indonesia, and the Philippines. The Pacific collections include fans, fly whisks, chiefly regalia, canoes, paddles, clubs, masks, and tools, and textiles such as batiks, tapa cloth, and rare Maori cloaks. »
Extract from : https://evols.library.manoa.hawaii.edu/bitstream/10524/35945/rabe%20inventory.pdf

Leo & Lillian Fortess collection, Kanehoa Bay, Hawaii :
Leo Fortess, known for collecting Pacific artifacts, died at the age of 84. Born and raised in Chicago, he arrived in Hawaii in 1941 on the 76-foot schooner Chance, with his wife Lillian and two other couples. Fortess began collecting Polynesian artifacts as the boat sailed through the Marquesas Islands and Tahiti in 1940 through 1941, an interest that he maintained the rest of his life. Fortess, a draftsman for Contractors for the Pacific Naval Air Bases in Hawaii, managed to  hoot rolls of still and movie footage of the aftermath of the Japanese attack on Pearl Harbour, which were later confiscated by military authorities and was never recovered. After the war, Fortess sold photo equipment retail and wholesale, but his real interest was Pacific Island cultures which he and Lillian collected avidly. Portions of his collection have been donated to the Honolulu Academy of the Arts. Fortess served as one of the few non-academic presidents of the Anthropological Society of Hawaii and was a life member of the Bishop Museum and Honolulu Academy of the Arts.