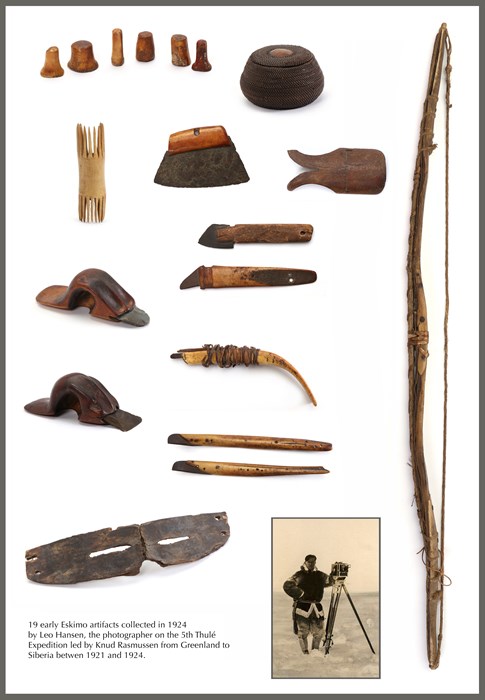 A collection of 19 pieces of early Eskimo ethnographic items collected in Alaska by Leo Hansen during the Danish "5th Thule Expedition" led by Knud Rasmussen between 1921 and 1924. The collection includes :

A very rare pair of snow goggles carved from a sheet of baleen. They present an archeological aspect and were probably taken from one of the sites that the expedition explored.

A pressure-flaking tool with ivory handle which was used to make flint blades.

An ulu with an iron blade and an ivory handle.

A group of 6 archaic ivory labrets.

The dates are variable and range from the late Punuk period up to the late Thule culture spanning approximately 1000 years. All of these objects are used and of normal functional size.

Leo Hansen joined the 5th Thule Expedition as filmmaker/photographer at Kent Peninsula where he was waiting for their arrival in November 1923. Rasmussen had requested a filmmaker from Denmark in a letter sent from Repulse Bay in January 1923. Hansen travelled across the Atlantic by ship landing in New York and then crossed Canada to Vancouver where he sailed on the Hudson Bay Company ship Lady Kindersley to Tree River, the Hudson Bay Company post; he finally arrived at the Kent Peninsula post on a small schooner in September. The Expedition lost no time putting Hansen to work documenting life in a Umingmaktormiut igloo village. He worked under extreme conditions between -40° c. and -50° c. and the camera would stop turning every 5 minutes. Hansen froze his fingers when he touched the metal camera. Hansen accompanied Rasmussen, Arnarulunguaq and Qavigarssuaq for the rest of the journey to Alaska. In Point Barrow, Alaska he had the opportunity of filming the whaler's festival.