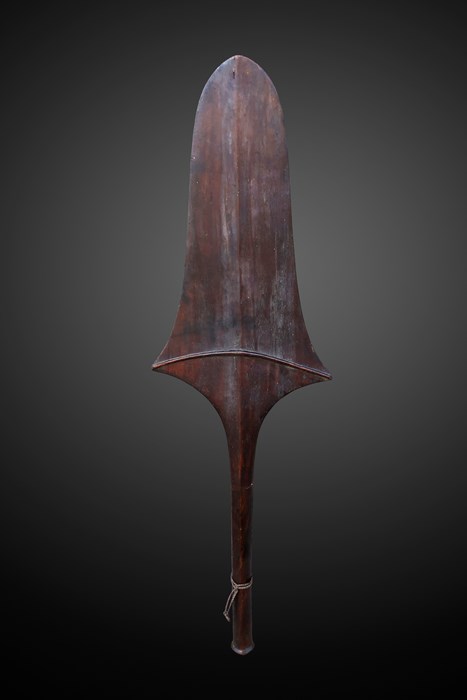 A large and massive, unadorned culacula, a prestige weapon associated with high ranking chiefs and war-priests.


Provenance Acquired by a family of collectors in the vicinity of Saint Jean de Luz in the 1930’s to 1950’s.

Literature: The culacula was used to deliver its blow with the sharp thin edge of its blade, cutting through flesh and bone or rather than simply shattering bones like most blunt edged clubs. The wide blade made the club - and thus its bearer highly visible and it was used by Chiefs and Priests, standing at the front of the war party, to direct the movements of troops and to shield them from flying missiles.

The paddle-form stems possibly from the early use of clubs of this shape by Tongan warriors to ward off the arrows of their Fijian enemies. Subsequently adopted by the Fijians in the 17th/18th centuries this type of imposing weapon comes in various reductions and formats; some with thinner blades, others with less obvious paddle form and yet others that are of excessively wide format and lack the lateral protrusions. Many of the later examples are highly decorated at the junction of the blade and haft; sometimes even the entire blade is incised with the typical Fijian or Tongan motifs; the grip is often carved with the dentate or zigzag motifs common to both Fiji and Tonga and in some rare cases the carved and incised decor is done by Maori carvers working on Fijian weapons in the European Whaling period.

This example is rare in so much that it is structurally intact other than minor chips off the edge possibly due to battle damage. Tonga, Polynesia (the flat bottom, diamond shaped butt here proposes a more Tongan origin for this example than Fijian). Iron wood (Casuarina equisetifolia) also known as Toa or Nokonoko, with a fine patina of age and use under an old coat of varnish. The original sennit (woven coconut fiber) attachment is still present. 113cm long x 33,5 wide. 18/19th century.