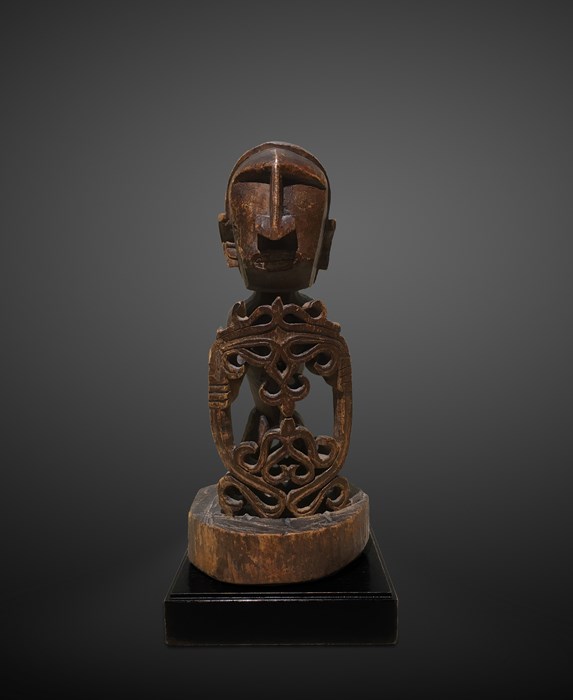 An important and rare standing korvar, or ancestral representation. It shows the ancestor upright, on a thick rounded base, standing behind an open-work plastron or shield. The complex motif of the frontal element is composed of scrolls forming a highly stylized “tree of life“. The figure is powerfully sculpted with both hands gripping the frontal shield. The face has a strong aquiline nose with wide nostrils, high cheekbones and a wide mouth showing the teeth. Western Geelvinck Bay, Korwar Area, Vogelkop Peninsula, Indonesian New Guinea, Melanesia. Wood (alstonia ?) with a good patina of age and wear. At some later point in time the eyes were painted in a European fashion with the result that there remains a circular imprint indicating the ocular sockets (paint subsequently removed). 30,2 x 13,5 x 11,9 cm. 19/20th century.

Literature: Other figures of the same style are in the collections of the WereldMuseum, Rotterdam and the Museum voor Volkenkunde, Leiden, and the Château Musée, Boulogne sur Mer. They all have mid to late 19th century collection dates.