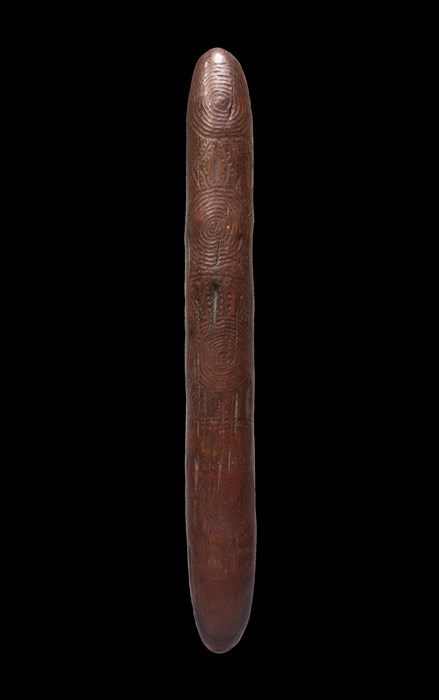 A superb message stick carved all over with a complex patern of geometric and symbolic elements that can confer an identity and possibly are a mnemotechnical system to relay a message. Message sticks (called "yabber-stic" in aboriginal English) were regarded as objects that granted its carrier a kind of diplomatic immunity, as it guaranteed safe passage and entry into the lands of other tribes, even when entering ‘enemy territory’.  When someone carrying a message stick entered another group’s country, they announced themselves with smoke signals and were then accompanied safely with the message stick to the elders so that they may speak their verbal message. The messenger would then be accompanied back to the border with a reply to pass back to their tribe. Arunta Language group, Central Desert, Australia. Wood with a thick old red ochre patina showing wear and usage. 39 x 4,4 cm. 19th century. Ex a private French collection.