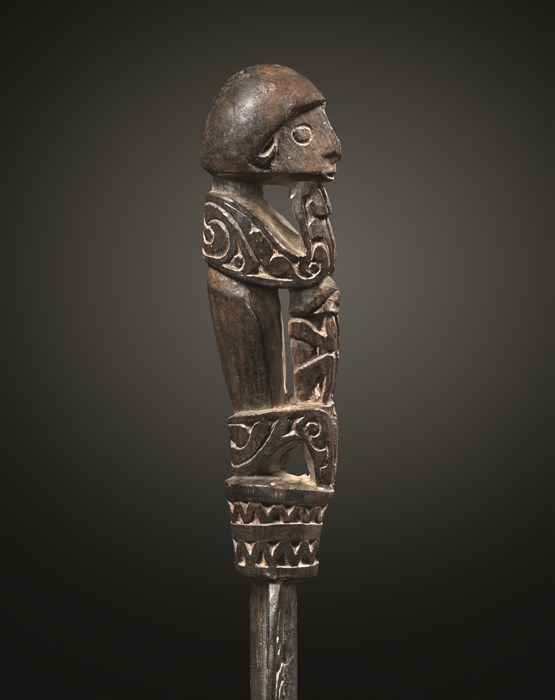 A lime spatula by an unknown Master-Carver showing a very rare (possibly unique) configuration of what can be construed as Mother & Child or Male & Female or simply two seated figures - one on the raised knees of the other. The figures are carved in the typical Massim pose with the body seated, arms bent with elbows on knees (smaller figure only) and hands raised to the chin (this also known as the closed "hocker" position). The larger figure is shown holding the head of the smaller one between its elbows conferring a touch of tenderness and humanity rarely encountered in Massim art. Massim Area, PNG, Melanesia. Ebony wood with lime infill. 32,4 x 3,2 x 2,8 cm. 19th century. Ex Emil Störrer (1950/60), Zurich; by descent.

Provenance Emil Storrer, (1917-1989) who became the most important Swiss dealer in African Art started out as member of the French Foreign Legion. He began trading in Berber carpets from Morocco. Later he organized expeditions in sub-Saharan Africa and collected important works of art the amongst the Senufo and Dogon in the early 1950’s.