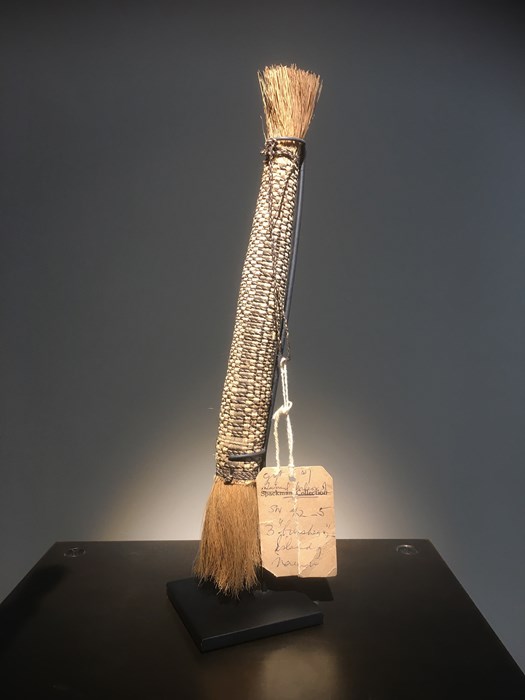 A rare ritual rattle, or traditional currency composed of a coconut fiber brush sheathed in a long pandanus fiber sleeve interwoven with human hair. It is reported but not verified that these objects can serve as a rattle or brush intended to "cleanse" the ill. However in a early photographe in my collection these enigmatic objects are shown as attached to the upper arms of "young married men"...

Isabel and Samuel Spackman
Isabel and Samuel Spackman of Philadelphia collected all manner of decorative objects on travels around Asia and Europe. At her death, Mrs. Spackman’s will directed that the collection be placed on long-term (99 year!) loan to a museum. Through a friend of hers (art instructor Howard Stratton), the work ended up coming to the Deleware Museum of Art. It was shown in special exhibitions here, lent to other venues, and used for educational traveling shows to schools and such. The collection was huge and uneven in quality—hundreds of items included furniture, decorative arts, prints, paintings, and clothing. The collection was largely Asian, but it also included European decorative arts. In the early 1990s, the Deleware Museum decided that this work was too cumbersome to store and did not make sense with the American/British focus of the permanent collection. The majority of the collection was sold at auction by Pook & Pook in Pennsylvania on Friday, January 24, 1992 and Saturday, January 25, 1992, in the "Outstanding 2-Day Auction" including artworks from the "Delaware Art Museum/Spackman Collection" with the proceeds (over $100,000) going to the Isabel M. Spackman Trust. It appears probable that the Nauru « brushes » were part of this auction however they were not illustrated in the catalogue. In 2018-19, the Deleware Museum reached out to the Trust to return a remainder of the collection, without success. The remainder was sold at Freeman’s auctionneers of Philadelphia.


Samuel W. Wilcox II
Banker and Grove Farm Plantation executive Samuel W. “Sam” Wilcox II (1910-1975), the son of Charles Henry and Marion Wilcox, was born at Koloa, Kauai into a family long-prominent in the affairs of Kauai. Among them were his paternal great-grandparents, American Protestant missionary teachers Abner and Lucy Wilcox, who arrived at the Waioli Mission Station in 1846 and served there until 1869. Their son Sam Wilcox’s grandfather and namesake, Samuel Whitney Wilcox, was a deputy sheriff at Hanalei prior to becoming Kauai Sheriff in 1872, a post he held for 25 years. His grandmother was Emma Washburn Lyman the daughter of missionaries David & Sarah Lyman – the founders of Lyman House and the Hilo Boarding School in the late 1830’s (Lyman Museum & Mission House, Hawaii « Big » Island). Sugar pioneer and Grove Farm Plantation owner and philanthropist, George Norton Wilcox, was Sam’s grand-uncle. In 1938, his two aunts, Elsie and Mabel Wilcox, and his uncle, Gaylord Wilcox, with funding from a trust created by their uncle, George Norton Wilcox, established Lihue’s G. N. Wilcox Memorial Hospital (now Wilcox Memorial Hospital), Kauai’s first general hospital. Following his graduation from Princeton, Sam Wilcox was employed by Oahu Sugar Co. for a spell and then entered banking with Bishop Trust Company, Honolulu.  From there, he moved on to a long career with Bishop National Bank — now First Hawaiian Bank — opening the bank’s Lihue branch as bank manager in 1942. Sam Wilcox was president of Grove Farm in 1973, when Grove Farm shut down its failing sugar operations and leased its 10,000 acres of sugarcane growing lands to McBryde Sugar Co. and Lihue Plantation Co., effective Jan. 1, 1974. While Sam Wilcox was president, Grove Farm also gifted 200 acres of prime sugar land in Puhi to the University of Hawaii upon which to build Kauai Community College. The Samuel W. Wilcox II Learning Resource Center on the college’s campus is named in his honor. For many years, Sam Wilcox was also president of the board of directors of G. N. Wilcox Hospital. He and his wife, Edith, had three daughters: Deborah, Pamela and Judith.