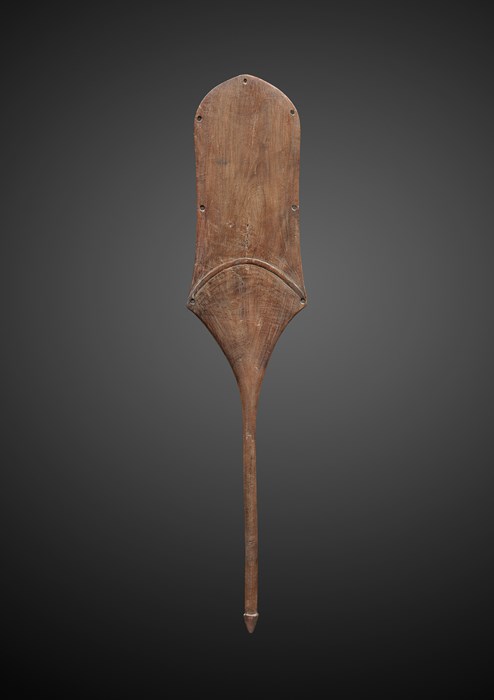 Dance Paddle or "paki" used in a specific dance known as me‘e tu'u paki. This example is unusual and probably unique in that it is pierced along the edges for tassels and embellishments. Tonga Islands, Polynesia. Wood. 85,5 x 18,3 x 2,3 cm 19th century or earlier. One corner is restored. Ex-coll. : Jean-Yves Coué, Nantes N° JYC 178.

The name meʻe tuʻu paki denotes a form of dance standing with paddles, an ancient Tongan group dance, reported by early European navigators like Captain Cook who saw and described the dance during his third voyage :

‘It was a kind of dance, performed by men and youths of the first rank; ... Any number may perform it, there were in this one hundred and five, each having in his hand an Instrument shaped something like a paddle of 2.5 feet in length, with a small handle and thin blade so that they were very light and the most of them neatly made. With these Instruments, they made many and various flourishes each of which was attended with a different attitude of the body and some different movement or another. They at first ranged themselves in three lines, and by different movements and motions each man changed his station in such a manner that those who were in the rear came in front. Nor did they remain long in the same form, but these changes were made by pretty quick movements; they at one time extended themselves in one line then formed into a semicircle and lastly into two square Columns, while this last was performing, one of them came and danced a harlequin dance before me with which the whole ended.’

Several paddles were collected on the Cook voyages : see the carved wooden paddle from Tonga listed by George Forster in 'The Catalogue of Curisoities Given to Oxford' as No 81 “A spatula of wood to mix up their paste of breadfruit with” in the Pitt Rivers Museum inv. 1886.1.1367.

This dance has been traditionally designed for men although women may take part if there are not enough men. The meʻe tuʻu paki resembles a kind of war dance; however, it is danced with little symbolic paddles as opposed to weapons.

The dress for this dance invariably is a large sheet of ngatu (tapa) wrapped around the body from chest to ankles. A girdle of leaves around the waist (sisi) is often added. The words of the songs are in a largely unintelligible language, although some maritme terms can be distinguished. There is a modified version of the meʻetuʻupaki in Futuna, called tapaki and even though different in format, a link between the two dance forms seems to be most likely. There is a theory that the meʻetuʻupaki was composed somewhere in the 12th to 16th century by a poet on ʻUvea to honour the Tuʻi Tonga (King). When the Tuʻi Tonga Kauʻulufonua I had lost some decisive battles, heralding the end of his empire and of the political function of the Tuʻi Tonga, he was forced to give the « copyright » of the dance to Futuna, where it is are still guarded as secret. In addition, the Futunans declared that from now on the Tuʻi Tonga title should be inferior to any Futunan title, and if ever a Tongan boat would make it to their island, it would be destroyed and offered to the gods. This still happened in the 19th century as recorded by William Mariner (writer). A Tongan proverb : vete fakafutuna (take apart in the Futunan way), still refers to something to be dismantled completely.