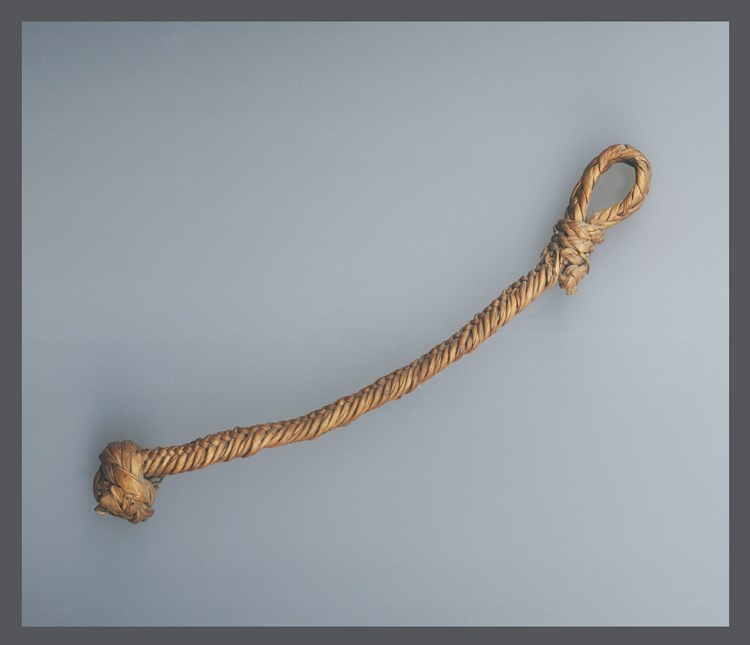 A very fine early spear-thrower. The spear-thrower is composed of a length of woven fiber, or cord, with a becket, or large loop, at one end and a large knot at the other. In using it the loop is slipped over the forefinger and the other end is fastened around the spear by a half hitch blocking the strap in place until the launch. As long as the cord is stretched by the pull of the forefinger it holds tight to the shaft. As soon as the cord is relaxed the slight elasticity of the fiber helps to release the band from the shaft helping to propel the spear forward with greater power and accuracy.

This type of spear-thrower is reportedly called Ounep in one of the local vernacular languages in New Caledonia as reported by George Cameron Stone in his opus A Glossary of the Construction, Decoration and Use of Arms and Armor in all Countries and in all Times, published in 1934.

The British Museum in London has a selection of at least 12 New Caledonian spear-throwers of this type in the reserves. Many of them were given to the museum in the first half of the 19th century (the earliest possibly in 1841), and several were gifts of Queen Victoria. One was collected in 1865 by Julius Brenchley on the HMS Curacao. One collected by Johann R. Forster between 4 and 13 September 1774 at Grande Terre in the North Province near Poéubo at Balade in New Caledonia on the second Cook voyage is in the Pitt Rivers Museum, N° 1886.1.1678 and it or an identical example is illustrated attached to the hat of a Kanak in plate XXXIX, the engraving of the drawing by W. Hodges, published by Strahan, London in 1777.

Literature: Spear-throwers are used around the world from the most ancient times as they are recorded as far back as to the upper paleolithic period some 30,000 years ago. The most commonly used term is Atlatl. The ancient Greeks used a fiber or leather strap spear-thrower called amentum and which functioned in the same manner as the one from New Caledonia. Similar throwing-straps were used on light javelins throughout Europe. Italian, Gaulish, and Iberian troops used them before and after the Roman conquests, they are mentioned in ancient Irish story, and remains have been found on spears in the Nydam bog finds, Flexible fiber or skin throwers are rare – the most common is the rigid type, which is a length of wood, stone or antler or bone with a hook or a depression at one end which fits a lodging at the rear of the spear.

Recent experiments have shown a 58% improvement in accuracy and distance on average using a flexible spear-thrower. Most rigid spear-throwers allow an increase in range of up to some 250 meters however powerful, accurate throws for hunting and warfare were probably not made over 20 to 50 meters which is still a substantial improvement over a handheld throw.